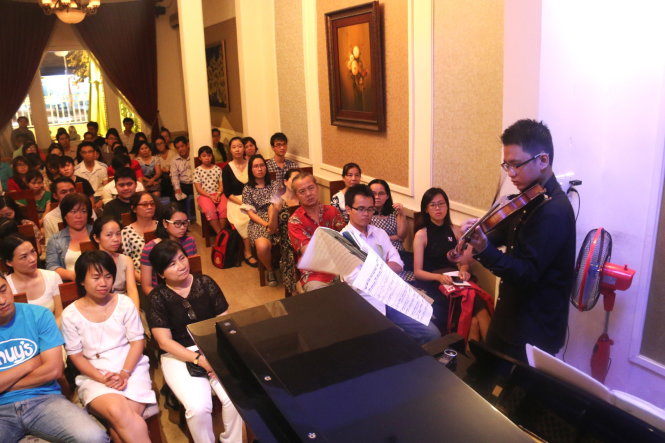 A group of Vietnamese teenagers and young adults have made a notable effort to germinate the seeds of love of, and appreciation for, classical music among their peers.

Germer, a group based in Ho Chi Minh City, has 41 members, most of whom are under 20 or twenty-somethings.

The group’s name, “Germer” in French or “Germinate” in English, speaks volumes about their intentions: to sow the seeds of classical music, a genre which is widely thought to be beyond laymen’s comprehension and appreciation, among youths who may not be aware of a single musical note.

A café in District 3 which was the venue for the group’s eighth performance last month was filled to the brim with an audience of nearly 100, mostly young, people.

“We don’t mind noise being made during our performances. Audience members are encouraged to join exchanges after the shows. This is how our group works to enhance classical music’s popularity,” Duong Nguyen Khang, 19, Germer’s leader, said.

In 2013, Khang, a high school student majoring in French, joined an exchange program in France.

At the school where the exchange was held, he noticed an auditorium where classical music was performed.

The boy learned from the students there that the school, just like many others in European countries, has long used music, particularly the classical genre, to educate their students on aesthetic and ethical values.

A nine-year student at the Ho Chi Minh City Conservatory of Music, Khang came up with the idea of doing something similar for his local peers.

His plan was enthusiastically embraced by his friends at the conservatory and high school, who then launched the Germer group and organized their first show in September last year.

The show was a success and Khang’s group quickly grew in size.

Kim Trang, 20, a local university student, said she was so bewitched by Germer’s performances that she joins the group as an event planner.

Trang and other members are working to turn more of the group’s plans into reality.