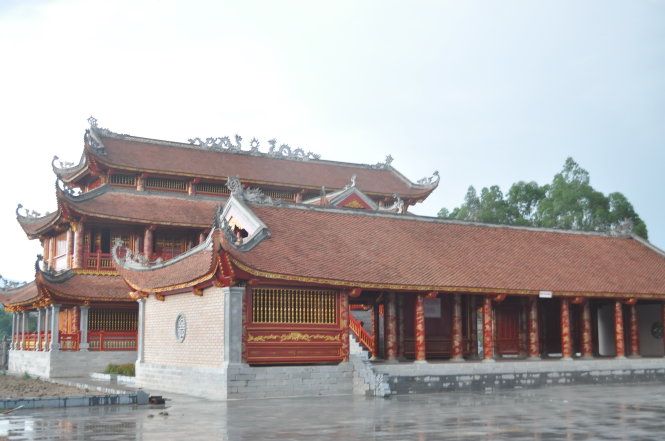 A project to build a multimillion-dollar cultural facility, which is intended to worship a highly revered Chinese philosopher/educationist and several noted Vietnamese academics of ancient times, in northern Vietnam has been frowned upon for its wastefulness.

The Van Mieu (Temple of Literature), which is in the making, has been criticized for being a colossal waste of the state budget.

Dr. Nguyen Quoc Tuan, head of the Institute for Religious Studies under the Vietnam Academy of Social Sciences, stressed that the spending on such a cultural structure, a large part of which is dedicated to paying tribute to Confucius, is quite unreasonable.

Confucius (551-479 BC) was a distinguished teacher, politician, and philosopher in ancient China.

He is widely revered in several Asian countries including China, Japan, Vietnam, and South Korea.

“It’s a huge waste of money and energy, even if other sources of funding [rather than the state budget] are mobilized,” he said.

Construction of the edifice, which costs a whopping VND271 billion (US$12.45 million) taken from state coffers, is nearing completion.

The mansion, which measures over 42,000 square meters in area, is located in Vinh Yen City, the heart of Vinh Phuc Province.

The edifice, which boasts sophisticated carvings and adornments, will comprise over 10 major structures, including steles to pay homage to 91 top exam takers in feudal reigns; an almost 3,000-square-meter yard where ceremonies and rituals will be held; and worshipping sections.

Work on the Temple of Literature began in 2012.

According to Tran Manh Dinh, director of the Vinh Phuc Department of Culture, Sports, and Tourism, the entire investment came from the provincial coffers, though the project investor had said they would mobilize other funding sources.

In October 2013, to ready itself for its ‘brainchild,’ the provincial People’s Committee decided to establish a Van Mieu Cultural and Scientific Center, which shares the land with the Temple of Literature.

They also launched a website on the future edifice at vanmieuvinhphuc.vn.

According to the Van Mieu Cultural and Scientific Center, apart from its worshipping function, the Temple of Literature will also be a venue for a wide array of educational and cultural activities, including academic seminars, sightseeing tours, and ceremonies to honor outstanding students.

The temple served as the province’s cultural project to commemorate the 1,000th anniversary of Thang Long-Hanoi in October 2010, the center said.

The edifice boasts brand-new structures which are modeled after the province’s old temple built some 300 years ago in Vinh Tuong District.

Only vestiges of the old temple remain.

Artifacts, including quill brushes and ink containers, which can be found at the Van Mieu (Temple of Literature) system across the country, are seen in these Tuoi Tre file photos.

Meanwhile, cultural authorities remain divided on whether to include a worshipping stele to Confucius in the Vinh Phuc Temple of Literature, and whether to worship him or Chu Van An (1292–1370) at the new temple’s main shrine.

An was a distinguished Vietnamese scholar, educator, physician, and high-ranking court official under a Vietnamese king’s reign in feudal times, who is most known for his integrity and vision.

As written in a proposal the Vinh Phuc Department of Planning and Investment and the local Department of Culture, Sports, and Tourism submitted to the provincial People’s Committee in October 2011, the future Temple of Literature will worship Confucius.

The edifice aims to further promote locals’ studiousness and respect toward teachers, the proposal said.

Though the edifice encompasses a shrine to the respected Chinese scholar in its construction plan, the provincial authorities still differ in opinions on whether to display his stele, according to Dinh, the director of the provincial culture department.

“We’ll organize more workshops to garner expert opinions regarding the issue before reporting them to the People’s Committee for a final decision,” he noted.

Professor Ngo Duc Thinh, former head of the Vietnam Folk Culture Institute, pointed out that just like in several Asian countries, in the past most villages with academic traditions in Vietnam boasted Van Mieu, or shrines or temples to Confucius, to promote good learning attitudes.

This shrine system was obliterated during a period when the local government made radical efforts to eradicate remnants of the feudal system and superstition.

In recent years, several locales in Vietnam have seen such temples revived.

“Jerking the temples back to life on a reasonable scale does play a certain role in promoting local youths’ eagerness to learn, though today’s education system is a far cry from the one adopted during feudal times,” Prof. Thinh observed.

He stressed that apart from Confucius, the Vinh Phuc Temple of Literature should also pay homage to eminent Vietnamese followers of Confucianism – the religion and learning sect founded by the Chinese scholar – in the past.

Suggested Vietnamese scholars include King Tran Nhan Tong (1258-1308), who was a visionary king of the Tran Dynasty (1226-1400) and founded a major Vietnamese Buddhist sect; and scholar Chu Van An.