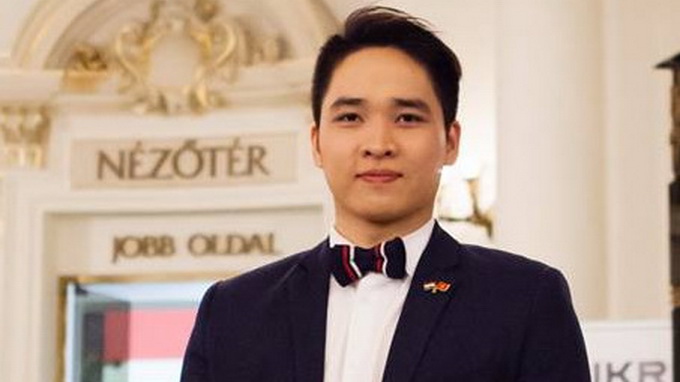 A Vietnamese student in Hungary took home first prize at an international opera singing competition held in the European country.

Ninh Duc Hoang Long, a 25-year-old Vietnamese national studying in Hungary, out-sang approximately 150 other contestants from countries such as Japan, Romania, the UK, China, and others to take home first prize at the 49th Simándy József International Singing Competition on Monday in Szeged, Hungary.

The Simándy József competition is widely recognized in the opera music scene as a well-established international competition, attracting the participation of world-class talent in its 18-25 and 26-35 age brackets.

Commenting on Long’s personal Facebook timeline, Mai Tien Nghi, a fan of the young singer, described the emotion his performance inspired, although he did not speak Hungarian.

“It was a touching moment to hear incessant rounds of applause coming from the audience after the performance and to witness the love that fans showed you at the front hall. I’m proud of you,” Nghi wrote.

Ninh Duc Hoang Long was born in 1991 in the Red River Delta province of Ninh Binh in northern Vietnam.

He attended the Vietnam National Academy of Music before enrolling at the Liszt Ferenc Academy of Music in Budapest, Hungary, via a governmental scholarship program run by Vietnam and Hungary.

Long was awarded a scholarship from Liszt Ferenc Academy for being among ten outstanding students in 2015.

Listen to Ninh Duc Hoang Long’s rendition of ‘Hazám, hazám’ during one of his classes: