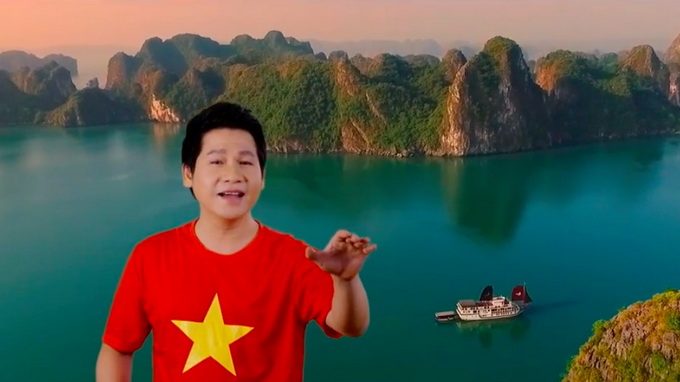 A music video with performances from over 30 Vietnamese artists was uploaded to YouTube on Tuesday in celebration of the country’s National Day.

The singer called for support from Vietnamese artists to assist in creating a music video asserting Vietnam’s maritime sovereignty in response to unfounded territorial propaganda produced by Chinese entertainers following July’s East Vietnam Sea ruling by an arbitral tribunal in The Hague.

In the ten-minute long MV, famous Vietnamese artists appear dressed in flag-colored T-shirts and ao dai (Vietnam’s national dress) in a performance dedicated to the beauty of Vietnam and its people against the background of iconic landscapes and historical landmarks from across the country.

An English translation of the lyrics is also included as subtitles for international viewers.

The MV was uploaded just three days before the country’s 71st National Day on September 2, commemorating Vietnam’s Declaration of Independence from French colonialists in 1945.

The music video has also been featured on various Vietnamese embassy websites across the world, singer Minh Quan, the initiator and director of the project, told Tuoi Tre (Youth) newspaper.

“Our initial idea was to make [the MV] four to five minutes long, but the project doubled because so many artists joined and there were so many beautiful landscapes to be included,” Quan said.

“Since it’s a non-profit, community music project, a limited production budget was a setback,” Quan confessed. “But fortunately everybody donated to our cause.”