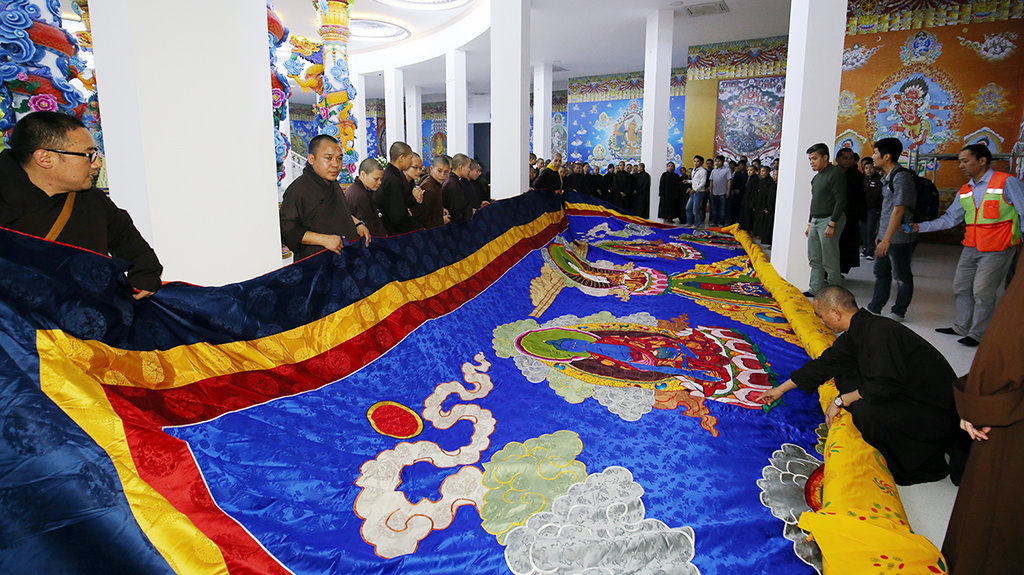 A giant embroidery of Guanyin, the Buddhist Goddess of Mercy, will be the special gift prepared by the Gyalwang Drukpa for his visit to the country next week.

The 12th incarnation of the Gyalwang Drukpa, an honorific title for the head of the millennium-old Drukpa Lineage school of Tibetan Buddhism, will pay a visit to Vietnam next week, announced Vietnam’s Drukpa center at a press conference in Hanoi on Tueday.

He has been to Vietnam many times before.

This time, the Gyalwang Drukpa will be staying in the country from March 14 to April 2, during which he will hold religious ceremonies to pray for peace in Vietnam’s and the happiness of its people.

He will lead a delegation of 100 Drukpa monks in an Indian Buddhist festival held at Truc Lam Tay Thien Zen Monastery in northern Vinh Phuc Province, as well as oversee the opening of a local festival honoring the Buddhist Goddess Guanyin.

During his visit, the religious leader will gift Vietnam an 11.7-by-16-meter embroidery of ‘Guanyin with 1,000 Arms and 1,000 Eyes’, the largest ever seen in Vietnam, according to VietKings, an organization specializing in certifying national records.

Guanyin, or Quan The Am in Vietnamese, whose name literally means “[The One Who] Perceives the Sounds of the World”, is an East Asian Buddhist divinity associated with compassion.

According to Dang Tung Lam, a representative from Drukpa Vietnam, the masterpiece is impressive not only in its size but also in the tremendous efforts and delicacy put into the embroidery by 40 Bhutanese artisans who worked under close supervision of senior Drukpa monks.

The embroidery will be displayed publicly at the big temple of Tay Thien in Vinh Phuc Province starting March 16.

The giant Guanyin embroidery to be gifted to Vietnam by the Gyalwang Drukpa. Photo courtesy of Drukpa Vietnam