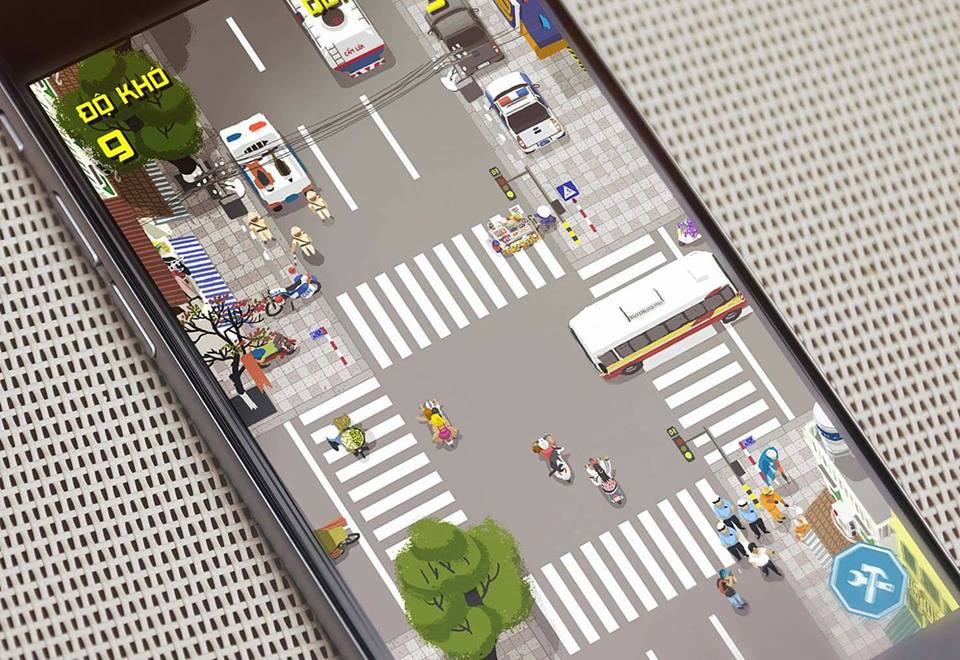 If you still cannot muster enough courage to attempt traffic in Vietnam, do it virtually with an addictive mobile game made by two young Vietnamese.

Available on both the iOS and Android app stores, Coi To Cho Vuot, literally translated as “you can cross if your honking is big enough,” is a 2D game allowing users to guide its main character through the busy streets of Vietnam.

Players must avoid several obstacles, from possible collisions from behind by speedy motorbikes to commuters who cross the streets carelessly. The longer they survive, the more points users gain to unlock new game characters.

Users only need to touch their device screen to swerve left or right or slow down to avoid the obstacles.

Players can choose from a wide range of characters, from the notorious ‘Ninja LEAD,’ a term used mostly to describe female Honda LEAD scooter drivers who cover their body from head to toe to avoid the sun, to the ‘big carcass transporter’.

The field of game play is displayed from a bird eye’s view, with the streets featuring typical scenes you might be familiar with; a speeding motorbike with more than two people on the seat, a man who carries a freshly slaughtered pig on the backseat of his motorbike, or that ‘Ninja LEAD’ who crosses the streets in the most dangerous way possible.

Despite its simple graphics, the game boasts other details unique to Vietnamese streets, such as street vendors pushing their bicycles along and burning their stove on the pavement or cattle leisurely wandering along the roadside.

The big advantage of the game is that it only features Vietnamese language. But foreign players can easily get started as the game does not have many buttons to click or steps to follow.

“Traveling on the streets in Vietnam always brings thrills and stress comparable to a ‘dead or alive’ game,” the game developer, Phong Duong Comics, writes in the app introduction.

“We created this game in a bid to replicate how it feels when traveling on Vietnam streets.”

The developer said it has dedicated the game to a campaign aimed at raising honking awareness run by Ford Vietnam.

Phong Duong Comics, consisting of talent painter and illustrator Thanh Phong and scriptwriter Khanh Duong, is known for its works including the historical comic series ‘Long Than Tuong’ (Marshal Long).