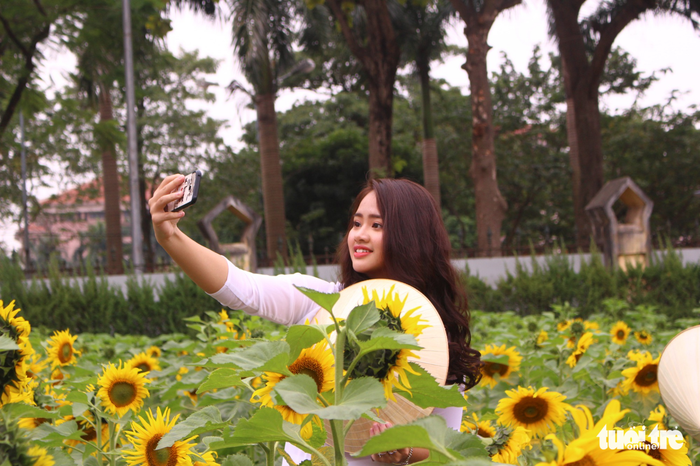 A blooming sunflower garden in Hanoi is attracting visitors amidst the cold weather.

The sunflower garden covering an area of 2,000 square meters within the Imperial Citadel of Thang Long, located on Quan Thanh Street in Ba Dinh District, has become a favorite destination for local residents as well as visitors to the Vietnamese capital.

The central sector of the imperial citadel was listed as a UNESCO World Heritage Site on July 31, 2010.

The flower garden was grown on October 20, 2017, mangers of the site stated, adding that it took about 70 days for the flowers to bloom.

The sunflowers have become one of the highlights for the complex, attracting young people as well as foreign tourists.

The managers of the garden have also spent their breaks enjoying the beauty of the sunflowers and taking photos with the blooms.

“We have been watering and fertilizing the plants in accordance with the schedules set up by our agricultural engineers. This is the result of everybody’s hard work,” Tran Thi Tham, one of the gardeners, said.

“I love the flowers and love seeing people have a good time with them,” Tham continued.

Another garden of sunflowers is being tended at the venue and is expected to blossom in the near future.