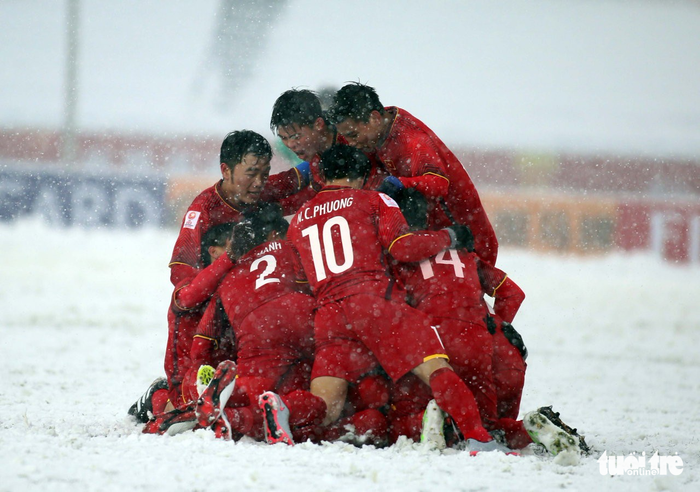 A local production house has unveiled its plan to make a movie inspired by Vietnam’s remarkable journey at the 2018 AFC U23 Championship in China, where the team defied all odds

The film project, titled ‘Viet Nam Oi!’ (Dear Vietnam!), will begin filming right after the tournament’s conclusion on Saturday, according to Minh Beta, founder of the Hanoi-based Beta Media production house in charge of the project.

“This is a mark of honor that I as well as other Vietnamese football fans and film lovers would like to dedicate to our national U23 team,” Minh Beta said.

“To me, the fact that they made it to the final was a miracle in itself. Regardless of the result of Saturday’s match, the players are the champions in the hearts of over 90 million Vietnamese people,” he added.

According to Minh Beta, ‘Viet Nam Oi!’ will follow the journey of goalie Bui Tien Dung from a small boy to a national hero.

Dung was praised for his exceptional performance in the tournament that contributed greatly to Vietnam’s wins and won him a Third Labor Order from the Vietnamese State President.

The plot will also explore the themes of friendship, teamwork, patriotism and love as it follows the Vietnamese players’ journey at the Asian tournament.

The film is expected to hit cinemas in November 2018.

Few had predicted that Vietnam would make it to final before the tournament commenced, as they had drawn into the same group with title favorites South Korea, Australia and Syria whilst the team had never even qualified for the quarterfinals.

The Golden Stars defied the odds to finish the group stage as runners-up behind South Korea, and were the first team in Southeast Asia to pull off this incredible feat.

The Reds defeated former champions Iraq 5-3 on penalties in the quarterfinals after a 3-3 draw after 120 minutes, before going on to eliminate Qatar 4-3 in another penalty shootout following a 2-2 tie after 120 minutes in the semis.

Vietnam’s fairy tale ended on Saturday, when a 120th minute header from Uzbek substitute Sidorov shattered the championship dream of the indomitable players, who had held their ground in the heavy snow with a 1-1 draw until that moment.

On Sunday, the players were welcomed back to their country as national heroes by a huge crowd that stretched kilometers from Noi Bai International Airport in Hanoi to the city center.