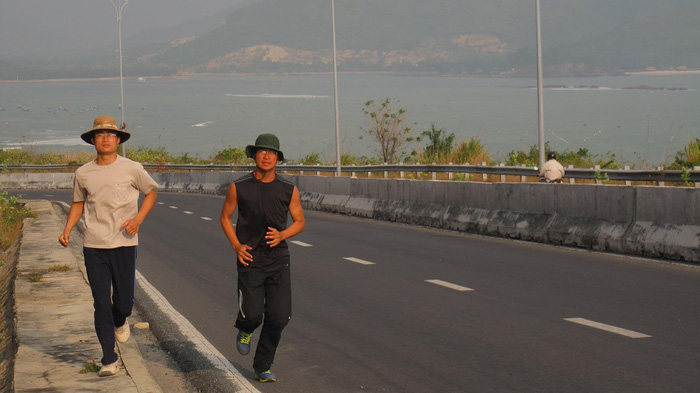 Vietnam man claiming to have run nearly 1,800km in a month addresses doubts

A Vietnamese man who claims to have run 1,750 kilometers from Hanoi to Ho Chi Minh City in 30 days have addressed his skeptics after a state TV documentary about his feat was postponed due to controversy.

Cao Duc Thai, 30, said he had run the distance in 2014 in an attempt to inspire others to take up reading, a source of motivation that had helped him achieve ‘the unbelievable’.

His feat was made into a documentary ‘Hanh trinh truyen lua’ (The Inspiring Journey), which had been scheduled to air on state-run Vietnam Television (VTV) from Saturday.

However, skeptics began questioning whether covering the distance in such a short time was humanly possible after a trailer for the documentary was uploaded on social media earlier this week.

Many asked to see photos and GPS track logs of Thai’s run as evidence of his achievement, and demanded that VTV postpone airing the documentary until it was proven that Thai had run between the two cities in 30 days.

“VTV is a national broadcaster, and therefore should only report on the truth,” Nguyen Quang Thach, who once traveled north to south by motorbike and on foot, wrote on his Facebook account.

“If Thai wants to inspire others to take action, he should first address the controversy around his achievement.”

VTV, in response, has delayed broadcasting the documentary and promised to organize a dialogue between Thai and those who cast doubt on him to clear things up.

Meanwhile, Thai said he had planned to share his running tips after the program aired but could no longer remain silent in the face of recent developments.

“I had trained for five months from July to December 2013 before I embarked upon my journey,” Thai told Tuoi Tre (Youth) newspaper.

“When I first started training, I ran for 15-30 kilometers straight without resting, which was exhausting after a few weeks,” he said.

His Eureka moment came when he learned about American ultra-distance runner Stu Mittleman, who had run over 1,600 kilometers in less than 12 days.

Between runs, Thai said he would rest to recover his stamina and have something to eat and drink to restore his energy.

He also ran mostly in the morning and evening to prevent loss of endurance due to midday heat.

“In total, I spent ten hours on running 60 kilometers each day using this method,” Thai explained.