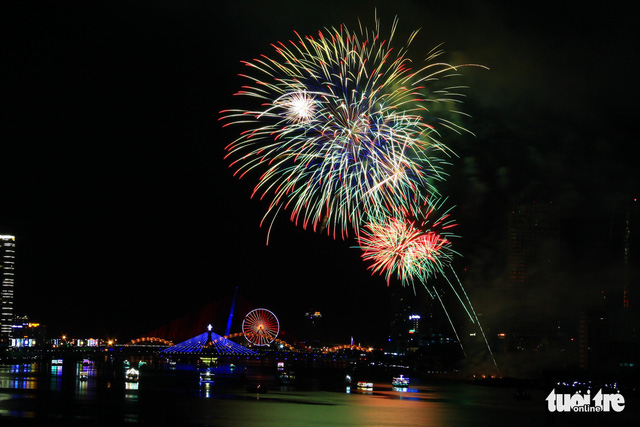 Sweden and Portugal took turns to compete in the fourth display of the 2018 Da Nang International Fireworks Festival (DIFF 2018) in the namesake Vietnamese city on Saturday night.

Team Göteborgs FyrverkeriFabrik from Sweden and Team Luso Pirotecnia from Portugal, the two final teams of this year’s competition, gave their best with colorful and mesmerizing pyrotechnic shows.

The next competition, which is also the final night of the international fireworks festival, will take place on June 30 between the two teams with the most spectacular performances striving for the championship title.

Under the theme “The Legend of Bridges,” the DIFF 2018 is attended by eight teams including host Vietnam, three-time champion Italy, previous winners the U.S. and France, Poland, Portugal, and first-time contenders Sweden and Hong Kong.

Vietnam and Poland performed on the first night of the event on April 30, followed by France and the United States on May 26, and Italy and Hong Kong on June 2.

Here is the pyrotechnic display by Team Göteborgs FyrverkeriFabrik from Sweden:

The fireworks performance by Team Luso Pirotecnia from Portugal can be seen in the following photos: