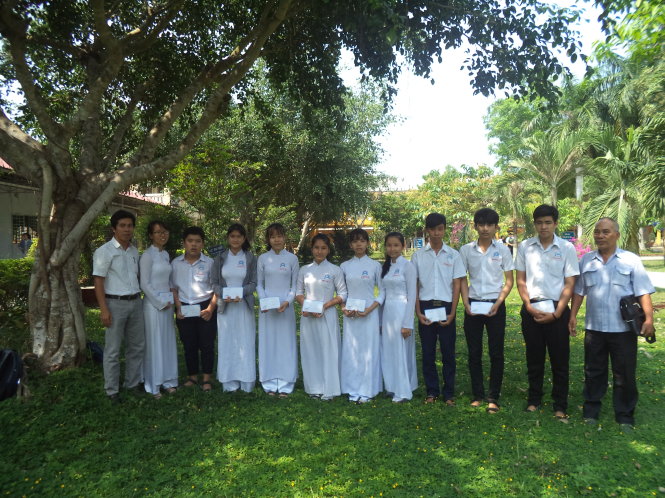 An elderly man from Vietnam’s Mekong Delta has earned widespread respect as he has spent around ten years giving support to local students from disadvantaged backgrounds so that they can continue their education.

“My character is so strange. When I see somebody in poverty on TV, I’m typically moved, sometimes to the point of crying quite easily,” said Quang Minh Duc, who lives in Lai Vung District of Dong Thap Province, a southwestern Vietnamese area with crisscrossing rivers and numerous rice paddies.

The 65-year-old senior has used his entire monthly war pension and solicited money from his children as assistance to hundreds of poor students in the province during the past ten years.

Duc once traveled nearly 100 kilometers to know more about the situation of Nguyen Thi Hong Nhung, who is now a fourth-year student at the Can Tho University of Medicine and Pharmacy, and gave her money, rice and instant noodles in person after seeing her on local television.

“She looked very suntanned. That touched me a lot,” he recalled.

He is helping 25 middle school, high school and college students.

“They are expected to go to school at their age, rather than work day and night for money,” he said.

The elderly man and other public-spirited people had a new house built for parentless Pham Thi Thuy Duong, a student at Dong Thap University, who had lived with her grandmother and mentally ill mother in a ramshackle hut.

“He has paid part of my tuition during the past academic years. He’s now given us a good place to live. I really don’t know when I can repay all his solicitude,” Duong said.

Duc’s thoughtfulness also continues after the students he has supported graduate, with seven such people now having a middle income.

“I’m happy about their success because I know that my efforts bear fruit,” he said.

One of them is Tran Thi Phung Quynh, whom he paid through middle school and college and treated with fatherly care.

“I’m very glad to call him father because my parents are dead and he’s the person who gives me the achievement I have now,” Quynh said.

“But for his help, I must have been unable to surmount problems and finish the education program.”

To Duc, his life should bring benefits to those in need, especially younger generations.

“As long as I’m healthy enough, I always help children in difficulty and I’m determined not to let any drop out due to poverty.”