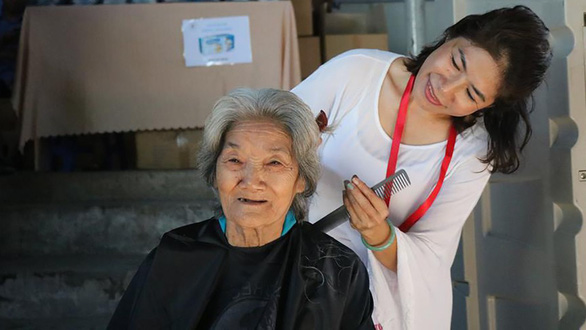 In Vietnam, Tet has been long considered one of the most important celebrations that should be spent with families.

However, many elderly patients have no choice but to spend this holiday in the hospitals where they are being treated.

Even though gifts and support are always provided to patients who are struggling financially, they are even more evident during this upcoming holiday.

At the Hospital of Thu Duc District in Ho Chi Minh City, a special form of support is provided to poor patients.

On January 27, which is the 22nd day of the last lunar month, when Tet or the Lunar New Year festival is one week away, the hospital will hold a special fair where patients are going to be allowed to “buy” goods for VND0.

Each patient will be allowed to “purchase” seven different goods of their own choice regardless of their price on the market.

The fair organizers will also hold other activities to raise funds to pay for the insurance of many patients who cannot afford the medical care they need.

In charge of this program is the department for social affairs of the Hospital of Thu Duc District, which usually finds ways to support patients in dire need of care but without financial means.

“So far we have been able to find 25 stalls to join us and hopefully the number will increase,” Nguyen Thi My Chau, head of the department, beamed.

The fair plays an important role in giving the patients a wholesome Tet holiday despite their being away from their families on this special occasion, which includes an experience of shopping for new things.

Moreover, it will have the patients feel supported and loved by many, thus giving them more strength to fight their illnesses.

Last year, the fair was organized for the first time after a research on patients’ needs had been conducted at the hospital.

Having received positive feedback, the hospital management decided to make the fair a biannual event held before Tet and the Doan Ngo Festival, which is celebrated on the 5th day of the 5th lunar month.

Annually there are around 100 patients inevitably spending the celebrations at the hospital and the expenses for the fair usually range from VND250 million (US$11,000) to VND300 million ($13,000).

Funds are raised through donations from doctors, hospital staff, and different charities. All of them participate in organizing the fair and other activities for the patients as well.

The department for social affairs of the hospital is also trying to sell cashew nuts to raise funds for poor patients, especially to buy these patients insurance as a gift for the forthcoming Lunar New Year.

“This year the fair will play an even more important role, as it is going to sell goods to fund insurance and wheelchairs for many patients,” Chau, the departmental head.

The Hospital of Thu Duc District makes significant efforts to help their patients, but they are not the only one to do so.

Binh Dan Hospital in Ho Chi Minh City is also trying to “speed up” its crowd-funding activities as Tet is nearing to support poor patients so as to guarantee a warm and meaningful holiday for them.

On a daily basis, the hospital also makes an effort to find sponsors and funds for poor patients.

Having a fund supporting patients who cannot afford basic treatment is a common practice in many hospitals in Ho Chi Minh City.

These funds usually heed the patients’ financial situation while also providing emotional support for them.