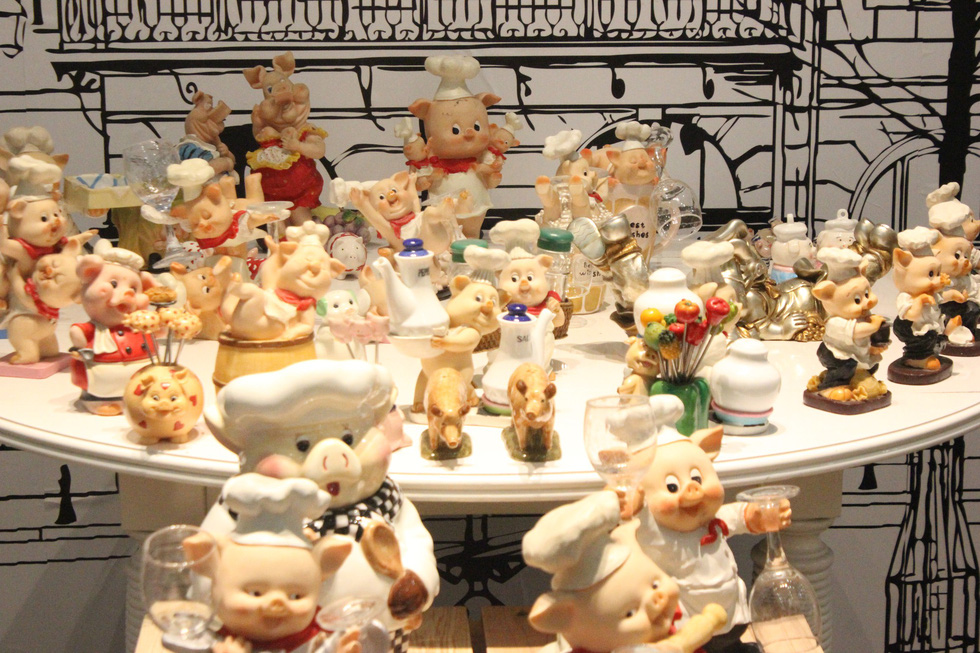 A portion from the exotic 6000+ pig statues and drawings in a collection of renowned Vietnamese historian-turned-politician Duong Trung Quoc is on display at Vietnam Women’s Museum in Hanoi to commemorate the coming Year of the Pig.

The exhibition, named “My Zodiac Sign, the Prosperous Pig,” kicked off on January 23 evening.

As its owner, historian Quoc, who is quite peripatetic, said the collection enjoys a great deal of diversity.

The pigs exhibited come in all shapes and sizes, and hail from every nook and cranny across the globe.

Sightseers and art enthusiasts promise bafflement the moment they lay eyes on the sheer volume of the exhibits.

Exquisite additions, from Western civilizations such as Québec, Rome, Germany, Chopin’s Poland, to the world-acclaimed Yixing clay pigs from Wuxing City, China, and the Running Pigs figurines from the Russian Mrs. Beauty Contest held in Kaliningrad, also constitute a special part of the spectacle.

Aside from the physical fascination on show, it is the various tales accompanying each piggy piece that compel the mass under its enchantment.

Prominently, it welcomes the pig drawings of Bui Xuan Phai, a legendary painter in Vietnam.

The exhibition will persist until after Lunar New Year celebration, which lasts for nine days from February 2, marking the first occasion the museum has received both domestic and international visitors during the period.

Sift through the “My Zodiac Sign, the Prosperous Pig” exhibits and see the culmination of cultural arts from all over the world.

Duong Trung Quoc, 72, is a Vietnamese historian notable for his practical observation methods in culture and arts – which often involve him trekking far and wide – and his downright honest feedback at the lawmaking national assembly as a congressman representing Dong Nai Province, southeastern Vietnam.

As lunar 2019 is the Year of the Pig, whose sign Quoc’s birth year falls under, he cooperates with, and gives consent to, Vietnam Women’s Museum so that the latter may put his vast collection on display.