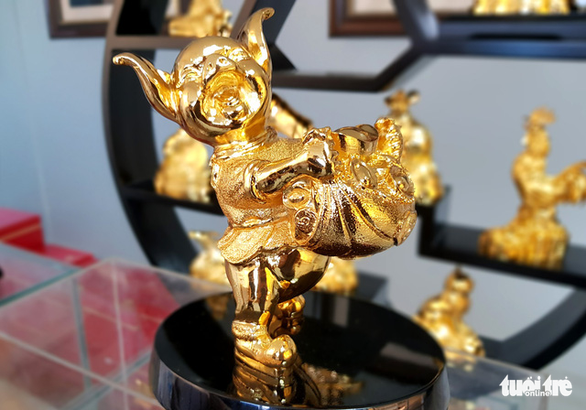 Two days ahead of the Lunar New Year, gold-plated figurines of pigs, the zodiac symbol for 2019, are selling like hotcakes despite their hefty price tags, as Vietnamese make a last-minute rush to find original gifts for the holiday.

In the run-up to the holiday, businesses have placed orders numbering well into the hundreds for year-end gifts for the employees, brining healthy sales numbers for local retailers.

At a high-end store in downtown Ho Chi Minh City where statues and drawings of pigs are selling at prices ranging VND2-28 million (US$86-1,200), each pig is plated in 24k gold imported from Singapore and Malaysia.

The original plan was to sell just five of the golden pig statues, but with such skyrocketing demand the store owner expects to make arrangements to import several more.

As of the end of January, the store’s gold pig-shaped chopstick holder was on sale for VND2 million ($86) while a pig meant to bring prosperity to its owner was valued at VND11 million ($472).

The most expensive pig figure at the store had a VND14 million ($600) price tag attached.

That pales in comparison to a pig reunion drawing on sale for VND28 million ($1,200).

According to the owner, his team has spent the entire year putting the collection together.

They were hoping their 1,000 units can meet customer demand during this busy holiday season.

The pigs were also making their way to online shopping portals at prices ranging from VND3 million (US$129) to VND28 million (US$1,200) after discounts and sales.

Huynh Quang Thi, owner of a gift shop in Ho Chi Minh City, shared that of the 12 zodiac signs, the pig is favored the most because it is believed to bring luck and prosperity.

It is also accompanied by the most blessings.

“About half were bought for decoration and the other half for gifting. About 70 percent of our customers are Vietnamese and the rest are foreigners,” Thi stated.