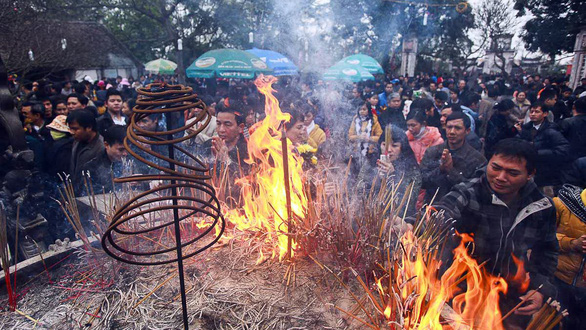 The most common scene at any pagoda during the first lunar month in Vietnam, when people flock to pagodas to pray for luck and health, is thick layers of fog made of smoke from all the burning joss sticks.

As the pilgrimage season has started in the Southeast Asian country following the Lunar New Year (Tet) holiday that ended on Sunday, a Vietnamese academic raised an alarm on the habit of excessive burning of joss sticks and recommended solutions to what he said is a dangerous practice, in a recent interview with Tuoi Tre (Youth) newspaper.

As most of the joss sticks today get their fragrance from chemicals rather than natural ingredients, Tran Dinh Son, deputy director of the Vietnam Center for Buddhist Studies, has warned that people should change their practice of excessively burning incense as it can affect their health and pose fire risks.

Incense made of chemicals

As it is considered a medium to make a connection with spiritual beings, lighting incense is common both as a religious and spiritual practice in Vietnam.

For centuries, burning incense has been an irreplaceable part of praying both at home and at the place of worship among most Vietnamese.

But today, many people tend to burn a lot of incense, especially at pagodas, believing that the more the better.

It is not uncommon to see a family of a few members burning a whole pack of joss sticks in a stuffy pagoda.

“The practice is harmful to human health as far as the materials to make incense are concerned,” Son told Tuoi Tre.

Originally, incense was made of various aromatic plant materials, so it can release a smoky fragrance when lit.

“This is why people in the past lit up incense not only for spiritual reasons but also for the atmosphere to be filled with good smell, bringing in a relaxing feeling,” Son said.

But today, as the plant materials have become more expensive and rarer, the fragrance of incense is artificially recreated using toxic chemicals.

Such products are usually available at low prices, and are favored by those who love to light incense in huge quantities at pagodas.

“Smoke released from the chemically scented incense is not good for human health,” Son said.

“As all visitors to pagodas where incense is lit en masse will be affected, this habit needs to be changed.”

Tradition that cannot be removed

Years back, in places of worship, Vietnamese would burn incense sticks because they believed their scent would keep away evil spirits and calm people down mentally.

“Over the years this has grown into a belief that without incense the act of worship is considered incomplete,” Buddhist monk Thich Khong Nhien said.

Consequently, Son acknowledged that it is not easy to call for complete eradication of burning incense at pagodas.

“But it is necessary that people change their habit of excessively burning incense, and incense makers get rid of or limit the use of chemicals in their production,” Son underlined.

Echoing the view of the researcher, Thich Khong Nhien said authorities should supervise the use of chemicals in incense production to ensure health safety.

Religious institutions and pagodas should also do their share by limiting the use of incense at their places, Son added.

For instance, Ngoc Hoang Pagoda in District 1, Ho Chi Minh City has taken steps to prevent or limit the abuse of incense at the venue.

“Do not burn big joss sticks or too many of them at a time. Only one incense stick per person, please,” a sign at the pagoda reads.

The rules are embraced by many pagoda goers, including 47-year-old Tran Thi Thuy Duong.

“The pagoda does not allow burning a lot of joss sticks, which I find reasonable,” Duong said.

“It makes the air less stuffy and minimize the risk of fire.”

In conclusion, Son expressed his belief that when both the government and religious authorities cooperate in the drive, it is possible to make people lower their use of incense not only at pagodas but also at home.