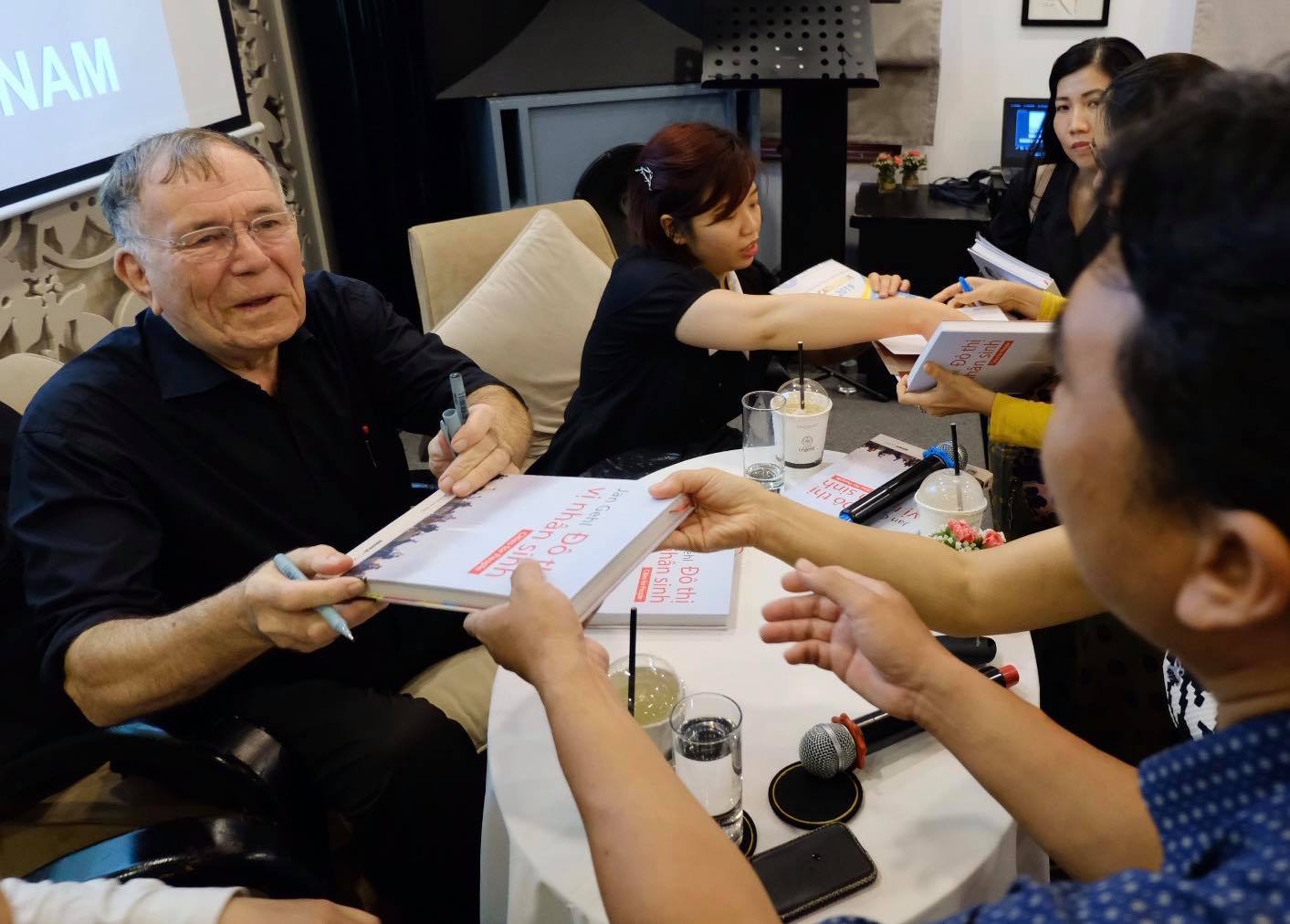 The official launch of the Vietnamese version of the book “Cities for People” written by the award-winning Danish architect Jan Gehl took place in Ho Chi Minh City on Friday.

The event, co-organized by the Danish Embassy in Vietnam, architecture news hub Ashui and other partners, was designed as a meet-and-greet with participation of Vietnamese architects, urban planners and architecture enthusiasts.

A similar book launch was held in Hanoi on Wednesday.

Gehl spent the majority of Friday’s event giving attendees a brief view of his book, as well as a peek at what cities for people look like.

He showed the importance of people as a central factor in urban planning and design.

“What cities are for, if not for people?” the author underlined.

This is why in “Cities for People” – one of his latest publications, the Danish architect does provide a detailed analysis of public spaces and their social dimension.

According to Jan Gehl, a successful city is the one designed with good rooms for safe walking and biking, leading to a less sedentary life “behind steering wheels and computer screens.”

After many translations in other languages, Vietnamese is the 33rd foreign language the book is available in.

The 300-page work is vividly illustrated with over 700 photos and drawings collected from Gehl’s works around the globe.

"Cities for People" has been translated into 34 languages and won various international awards, including the 2011 Environmental Design Research Association and Planetizen.

As a celebrated Danish architect and urban designer with more than 40 years of researching on the subject, Gehl has helped to transform urban environments around the world into city spaces that people can actually use and enjoy.

Over the course of his career, he has published many books besides “Cities for People,” including “Life between buildings,” “New City Spaces,” “Public Spaces – Public Life,” “New City Life,” “How to study public life” and most recently “People Cities”.

Gehl’s books are also considered a typical work of preference for many Vietnamese architects with different examples very close to life in Vietnam.

In 2009, Jan Gehl visited Vietnam and worked as an advisor for Hanoi authorities on a plan to improve public space in the capital city with pedestrian streets.

Currently, the walking areas in Hanoi have gradually become one of the most-visited attractions of the city.

With the issue of Ho Chi Minh City planning in a long term raised by the audience at Friday’s book launch, Gehl advised both urban planners and citizens to think about what they want their city to look like in the future.

He was also questioned for his opinion upon the feasibility of planning on public spaces for walking and biking in the southern metropolis, to which he answered that he believed “most of the important activities in one person’s life are done while that person is on their feet, not on motorbikes or cars.”

“Cities can change and we have to change too because of [the impact of] climate changes and resources declines,” Gehl told Tuoi Tre News at the event, implying his encouragement for changes in the Vietnamese people’s living style for more walking and biking.

“In the next ten or 15 years, we won’t have enough aids and resources to cover so much individual transportation,” he said, suggesting a cut down on motorbikes and cars in the southern metropolis.