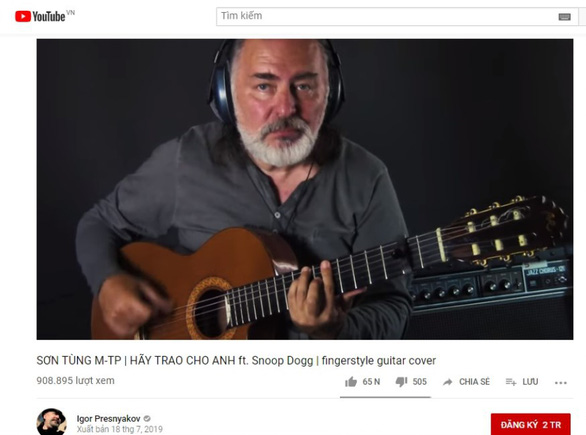 The video has received thousands of comments, many from Vietnamese fans, praising the 59-year-old guitarist’s talent and applauding his efforts in covering a Vietnamese hit.

“I am from Vietnam and I love your cover. I hope you will have more videos of Vietnamese songs,” one user commented while another suggested, “You should play more Vietnamese pop songs, we always support you Mr. Igor. [sic] Love from Vietnam!"

“Hay Trao Cho Anh” (Give It to Me) is the latest single released by 25-year-old singer Son Tung M-TP in collaboration with American rapper Snoop Dogg.

The song’s music video, which now has over 115 million views after just over three weeks on YouTube, also features American singer Madison Beer.

Soon after its release, the original music video for 'Hay Trao Cho Anh' hit several milestones, including the number 1 trending on YouTube Vietnam after only six hours.

In his own comment, Presnyakov delivered his own message to fans: “Son Tung M-TP + Snoop Dogg = Magic. Russia + Vietnam = Love!”

Igor Presnyakov first became popular on YouTube in 2017 thanks to his unique covers of hit songs, helping him garner more than two million subscribers for his channel.

According to his YouTube channel introduction, Presnyakov studied classical guitar and his acoustic guitar style is influenced by various musical genres including reggae, rock and roll, R&B, Jazz, and heavy metal.

“Igor also rarely sings any of the lyrics to any kind of song that he covers, and instead skillfully translates them into a guitar melody, having his instrument sing the words,” the introduction reads.

'Hay Trao Cho Anh' was not the first cover produced by the Moscow-born guitarist.

In the video’s comment section, Igor Presnyakov hit the “heart” button on a comment saying “please tell me that you really love Vietnamese songs,” a gesture meaning “yes.”

“After hearing this song for the first time, I've immediately decided to play it because it has touched my heart,” the guitarist cited the reason behind covering a song about a mother’s love.

“Thank you for your encouragement of my choice,” he added. “Let me dedicate it to all the mothers in the world.”