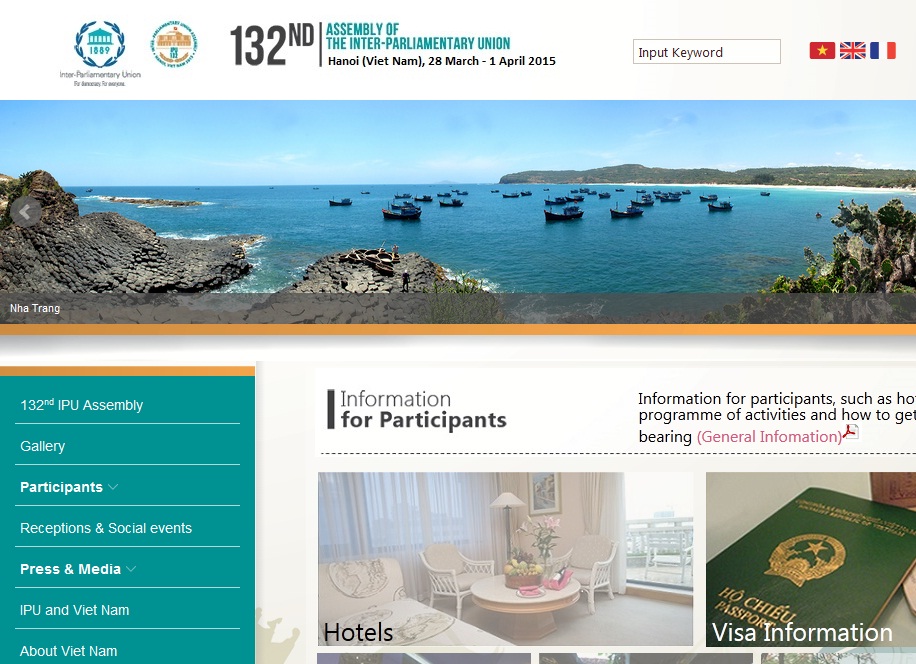 Vietnam has almost completed its preparations for the 132nd General Assembly of the Inter-Parliamentary Union (IPU-132) that will take place in Hanoi from March 28 to April 1.

Vietnam has almost completed its preparations for the 132nd General Assembly of the Inter-Parliamentary Union (IPU-132) that will take place in Hanoi from March 28 to April 1.  The Vietnamese National Assembly (NA) Standing Committee convened a meeting on Wednesday to review the preparations for the event, which will be among the conferences having the highest numbers of international delegates to have ever been hosted by Vietnam.       It is expected that more than 1,300 delegates from 160 countries and territories will come to Vietnam for the IPU-132, according to the committee. All the preparations for the grand event have been nearly finished, said Tran Van Hang, chairman of the NA Committee for External Relations. More than 60 international delegations have already booked rooms at hotels in Hanoi and many of them have registered their visit to Vietnam before or after the IPU-132, Hang added. In the current complicated global context, the security and anti-terrorism plans for this event become the highest priority of relevant Vietnamese agencies, he said.

At the Wednesday meeting, the representatives of the Ministries of Defense and Public Security said they have worked out plans to ensure safety and security for the IPU-132 and will organize rehearsals in the coming time. On October 6, 2014, the NA Office launched a website at www.ipu132vietnam.vn for the general assembly. The website – in Vietnamese, English, and French – will run working schedules, agendas, and supporting documents as well as news, photographs, and videos related to the IPU-132.

It will also serve as a communications channel between the event’s organizing board, the Association of Secretaries General of Parliaments, and member states.

Maps and information on tourism, hotels, and restaurants in Hanoi are also posted on the website. According to the IPU-132 agenda, the general assembly will focus on issues related to the sustainable development goals that are being discussed by the United Nations (UN) and are expected to be approved by the UN this year. The IPU-132 is scheduled to adopt the Hanoi Declaration, which will serve as an official document to be submitted to the 2015 Legislative Summit slated for August 3-6 in Seattle and to the United Nations in September this year.