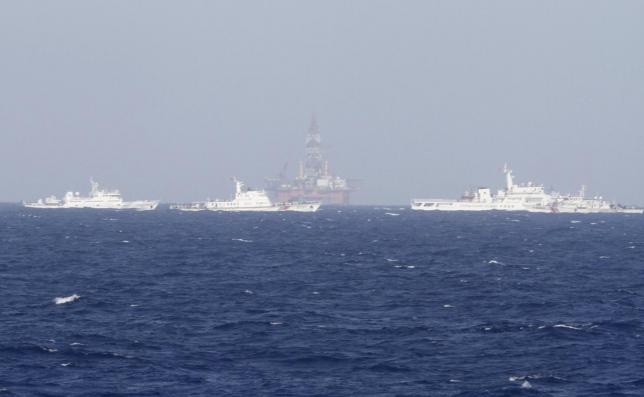 The drilling rig was discovered near the entrance of the Gulf of Tonkin, about 21 nautical miles east of the median line between Vietnam and China, on January 16, according to the Ministry of Foreign Affairs.

The Gulf of Tonkin is a body of water located off the coast of northern Vietnam and southern China.

The location is in the zone overlapping the continental shelves of Vietnam’s central mainland and China’s Hainan Island, which has not been demarcated by the two parties, Vietnamese authorities said.

In response to the incident, representatives from the Ministry of Foreign Affairs on Monday met with their counterparts at the Embassy of China in Hanoi to express Vietnam’s concern over the relocation of the oil rig.

Vietnam has demanded that China not carry out any exploitation and remove the oil rig from its current position, Ministry of Foreign Affairs spokesperson Le Hai Binh said on Tuesday.

“Vietnam will defend its rights and legitimate interests over the sea area as per international law, including the 1982 United Nations Convention on Law of the Sea and relevant international realities,” spokesperson Binh asserted.

According to international law and agreements between Hanoi and Beijing, one party shall not perform any activities without the other’s consent in the overlapping maritime area between the two countries, said Tran Cong Truc, former head of the Vietnamese government’s border board.

China’s drilling rig Haiyang Shiyou 981 had been illegally parked in Vietnamese waters since early May 2014, despite strong opposition from Vietnam.

Over the duration of its time in this location, Beijing often deployed more than 100 vessels including military ships to guard the illegal rig, in spite of Hanoi’s repeated demand for an immediate removal of the platform from the area.

In mid-July 2014, China moved the drilling platform, along with all guarding vessels, out of Vietnam’s waters.