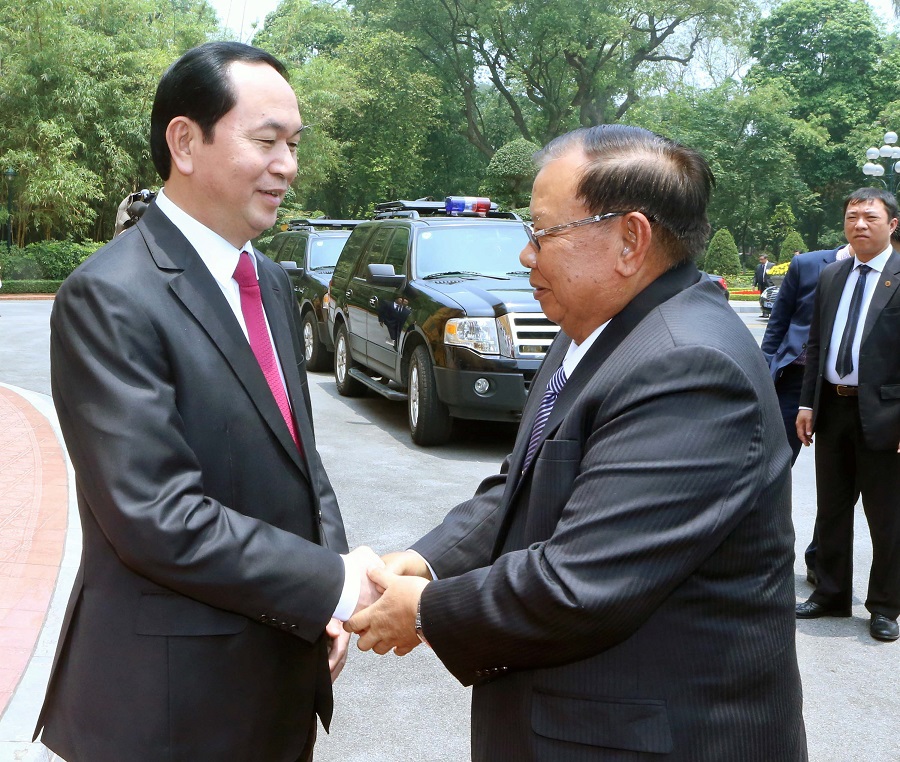 Vietnam has informed Laos of the situation in the East Vietnam Sea, expressed its viewpoints on the matter and suggested that the two nations cement mutual support at multilateral forums.

Vietnamese State President Tran Dai Quang held a meeting with his Laotian counterpart Bounnhang Vorachith in Hanoi on Tuesday morning, during the latter’s official visit to Vietnam, scheduled for April 25-27, according to the Vietnam News Agency.

President Quang praised the effective coordination between Hanoi and Vientiane at multilateral forums over recent times, asserting that Vietnam will continue its support for Laos to help the country fulfill its mission as the chair of ASEAN in 2016.

The Vietnamese head of state updated President Vorachith on the current situation in the East Vietnam Sea, stating Hanoi’s point of view.

He suggested that Laos continue to strengthen its ties with Vietnam regarding the sea disputes and cooperate with other nations for the sustainable management of water resources in the Mekong River.

President Quang also extended his gratitude toward the Lao state and Party and the Laotian people for assisting Vietnam in dealing with the consequences brought about by severe drought and salinization in the Mekong Delta and Central Highlands.

The Laotian head of state met with Ho Chi Minh City Party chief Dinh La Thang and chairman of the municipal People’s Committee Nguyen Thanh Phong, within the framework of his visit in the afternoon of the same day.

According to Secretary Thang, Ho Chi Minh City authorities have been focused on seven breakthrough measures to boost citizens’ living conditions, turning the metropolis into a modern and civilized destination.

He added that officials have been trying to speed up economic growth in order to turn the city into a leading center for economics, finance, trade and investment, science and technology, and education and training in the region.

Several projects are being carried out by investors from the southern city in Vientiane and in the Lao province of Champasak among others, the Party chief continued, adding that Ho Chi Minh City will commit to cooperate with Lao authorities and contribute to the traditional friendship of the two nations.

Expressing sincere appreciation for the welcome of the southern city leaders, President Vorachith considered the metropolis not only an active city but also a significant contributor to the development of Laos.

The Laotian president believed that his country and Ho Chi Minh City will further cement cooperation, respecting the wishes of the two Parties, state, and people.

He said that the two nations will work with each other for the development of each side and continue the traditional friendship despite the complicated progression of the regional and international situation.