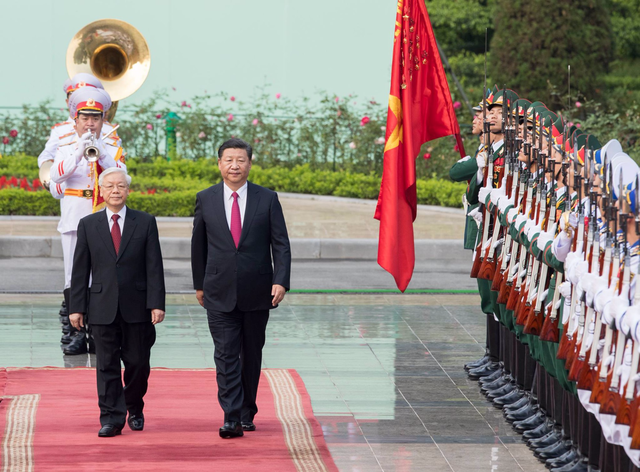 Vietnam and China have consented to strive for stable and sustainable cooperation during the state visit of General Secretary Xi Jinping.

The Chinese leader is on an official state visit to Vietnam, scheduled for November 12 and 13, following his attendance at the Asia-Pacific Economic Cooperation (APEC) Economic Leaders’ Week in the central city of Da Nang from November 6 to 11.

During the conversation, both parties reached consensus on empowering the Vietnam-China comprehensive strategic partnership and developing stable and sustainable cooperation.

According to General Secretary Trong, Vietnam treasures its relationship with China and wants to deepen the two nations’ friendship and partnership.

Hanoi has backed Beijing’s efforts to contribute positively to peace, stability and prosperity in the region and the world, he stated.

Replying to his host, General Secretary Xi said that the Chinese Party and government will continue to focus on reinforcing and developing the comprehensive strategic cooperative partnership with Vietnam, developing a stable, healthy and sustainable relationship to benefit the people and contribute to peace, stability, development and prosperity in the region.

He also referred to promoting the efficiency of cooperative mechanisms on trade, infrastructure, and money-finance, and connecting development strategies to achieve a goal of US$100 billion in bilateral trade in 2017.

He promised that China would continue providing non-refundable aid worth CNY600 million ($90.2 million) over the next three years in order to improve social security in Vietnam’s northern regions.

During the talks, General Secretary Trong underscored the necessity to safeguard peace and stability, as well as build trust in the settlement of issues regarding the East Vietnam Sea.

All parties should exercise restraint and avoid complicating the situation, while respecting the legitimate and legal rights of each other, and focusing on maintaining peace and stability at sea so as to prioritize socio-economic development.

He proposed that Vietnam and China effectively implement an agreement on basic principles guiding the settlement of sea-related issues, and that the Declaration on the Conduct of Parties in the East Vietnam Sea (DOC) be used in parallel with the negotiations on building a Code of Conduct (COC) for the maritime area.

General Secretary Xi agreed that both nations should properly manage disputes in the East Vietnam Sea to preserve peace and stability.

China wants to work with ASEAN to implement the DOC comprehensively and negotiate and build the COC for the sea, the Chinese leader said.

Following the meeting, the two leaders witnessed the signing of 12 important cooperative documents between the two countries.

Prior to the talks, General Secretary Xi joined Chairwoman of the Vietnamese National Assembly Nguyen Thi Kim Ngan at the inauguration of the Vietnam-China Friendship Palace in Hanoi.

He was slated to meet State President Tran Dai Quang on Monday.