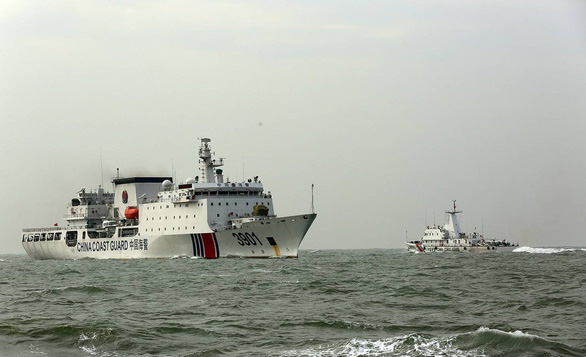 The U.S. State Department said on Saturday it is concerned by reports of China’s interference with oil and gas activities in the East Vietnam Sea, including Vietnam’s long-standing exploration and production activities.

“The United States firmly opposes coercion and intimidation by any claimant to assert its territorial or maritime claims,” the State Department said.

“China should cease its bullying behavior and refrain from engaging in this type of provocative and destabilizing activity,” it added.

The statement came after the Chinese survey ship, Haiyang Dizhi 8, and its escorts has over the last several days conducted activities in the southern area of the East Vietnam Sea, according to the Vietnamese foreign ministry.

These activities by the Chinese ships “violated Vietnam’s Exclusive Economic Zone and Continental Shelf as established in the provisions as established in the provisions of the 1982 United Nations Convention on the Law of the Sea, to which Vietnam and China are party,” Le Thi Thu Hang, the foreign ministry’s spokesperson, was quoted as saying in a statement posted on its website on Friday.

“This area lies entirely within the Vietnamese waters.”

Vietnam has sent diplomatic notes to oppose China’s ships infringing upon Vietnamese waters, demanding a halt to such violations and calling on “relevant parties” and “the international community” to jointly protect their “common interest” in the East Vietnam Sea, according to the foreign ministry.

There have been controversial reports of the route through which the Haiyang Dizhi 8 has traveled over the last days.

These reports stemmed from updates by Ryan Martinson, an assistant professor at the U.S. Naval War College, on his Twitter account since July 10.

Other Chinese vessels escorted the Haiyang Dizhi 8, according to the assistant professor.

Operated by the China Geological Survey, the Haiyang Dizhi-8 is 20.4 meters wide, 88 meters long, can cruise for up to 16,000 nautical miles and has a maximum speed of over 15 knots, according to china.org.cn, a Chinese state news website, and the CGS.

The Vietnamese side has expressed its opposition to the encroachment many times and required China to respect Vietnamese maritime sovereignty.

“Vietnam has made contact with China on multiple occasions via different channels, delivered diplomatic notes to oppose China’s violations, and staunchly demanded China to stop all unlawful activities and withdraw its ships from Vietnamese waters, and to respect Vietnam’s sovereign rights and jurisdiction over its waters,” Hang said in Friday’s statement.

“This is also in the interest of Vietnam-China relations and regional stability and peace.”

She added that Vietnamese authorities at sea have employed a range of appropriate measures to exercise Vietnam’s sovereignty, sovereign rights and jurisdiction in a peaceful and lawful manner for safeguarding the Southeast Asian country’s waters.

As asserted in Hang’s earlier remarks on July 16, it is Vietnam’s consistent position to resolutely and persistently stand against any act infringing upon the nation’s sovereignty, sovereign rights and jurisdiction in Vietnamese waters established in the provisions of the 1982 United Nations Convention on the Law of the Sea, through peaceful means in accordance with international law and the convention.

“All countries within and outside of the region share the common interest in maintaining order, peace and security in the East [Vietnam] Sea,” Hang underlined.

“Therefore, in Vietnam’s view, all relevant parties and the international community should contribute to the joint effort to protect and ensure our common interest".