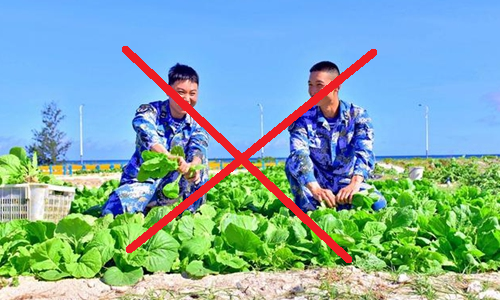 Vietnam has objected to China’s vegetable cultivation on an island in the Southeast Asian country’s Hoang Sa (Paracel) archipelago.

Vietnam has repeatedly asserted that it has sufficient historical evidence and legal basis testifying to its indisputable sovereignty over Hoang Sa and Truong Sa (Spratly) archipelagoes, which is in conformity with international law, vice-spokesman of the Ministry of Foreign Affairs Doan Khac Viet remarked at a regular press conference on Thursday.

All activities without Vietnam’s permission in these archipelagos are invalid, Viet emphasized as he answered reporters’ questions about China’s recent announcement of its use of new technology in vegetable cultivation on Phu Lam (Woody) Island in Hoang Sa.

Chinese newspaper Global Times on May 19 reported that Chinese soldiers, who were stationed illegally on Vietnam’s Phu Lam Island, had harvested more than 750 kilograms of vegetables on sandy beaches for the first time thanks to a ‘sand-to-earth’ technology.

The cultivation technology had been piloted on an over-300-square-meter land plot on Phu Lam Island for a month, the state-run newspaper stated.

The technology will be replicated on other features illegally occupied by China in the East Vietnam Sea, the newspaper quoted a Chinese military official as claiming.

The diplomat once again affirmed that Hanoi has indisputable sovereignty over Hoang Sa and Truong Sa, as well as its Exclusive Economic Zone and Continental Shelf in the East Vietnam Sea.

Any parties’ activities in these areas are violations of the country’s sovereignty and sovereign rights, as well as international law, Viet asserted.