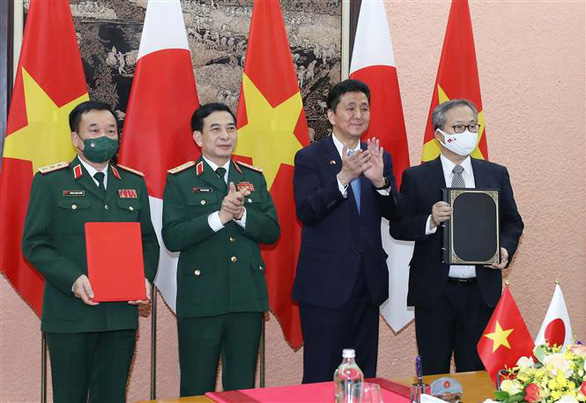 Vietnam and Japan have signed an agreement on defense equipment and technology transfer during the official visit of Japanese Defense Minister Nobuo Kishi to the Southeast Asian country.

The deal was inked during the three-day visit to Vietnam starting on Friday of Kishi, who was officially welcomed by his Vietnamese counterpart Phan Van Giang in Hanoi on Saturday.

Minister of Defense Giang highly appreciated the fact that Minister Kishi made Vietnam the destination of his first overseas visit since he took office.

Expressing his pleasure to have a face-to-face talk with his host, Minister Kishi praised the accomplishments that Vietnam has made in national construction and defense in recent years.

The two sides welcomed the signing of the Japan-Vietnam Defense Equipment and Technology Transfer Agreement, and decided to accelerate consultations on the transfer of specific equipment including vessels, the Japanese Ministry of Defense said.

The defense ministers reviewed defense relations over the past time and discussed the international and regional issues of mutual concern, including freedom of navigation and overflight amid the complicated developments in the region.

The two sides affirmed the necessity of complying with international law, including the 1982 United Nations Convention on the Law of the Sea (UNCLOS), and exchanged experience in response to the COVID-19 pandemic with the engagement of the military.

Both countries’ defense ministries will promote coordination toward the signing of memoranda to facilitate cooperation in cybersecurity and military medicine, the officials said.

The host and guest agreed that the two sides will closely coordinate in multilateral and regional mechanisms, especially ASEAN Regional Forum (ARF), ASEAN Defense Ministers Meeting Plus (ADMM+), and cybersecurity cooperation between Japan and ASEAN.

They also consented to continue contributing to regional peace and stability by fostering bilateral defense ties, including through high-level exchanges, promotion of cooperation related to peacekeeping missions, and port calls in Vietnam by Japan Self Defense Forces (JSDF) vessels and aircraft, the Japanese Ministry of Defense said.