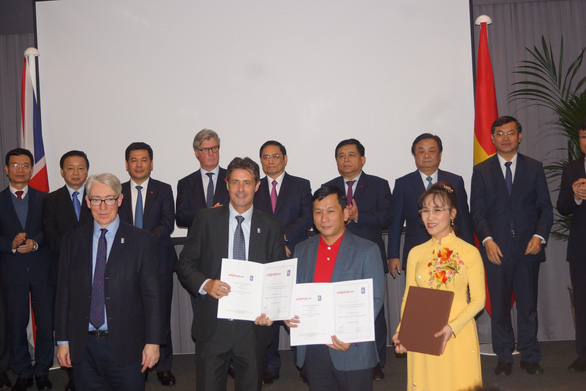 Vietnamese enterprises and agencies have signed 25 agreements with their foreign partners during the ongoing trip of Prime Minister Pham Minh Chinh in the UK for a working visit and participation in the 26th United Nations Climate Change Conference of the Parties (COP26).

PM Chinh witnessed the signing of the agreements worth billions of U.S. dollars at a ceremony held on Sunday in Glasgow, Scotland, where he had arrived earlier the same day for the COP26 and an official visit at the invitation of his British counterpart Boris Johnson.

These deals cover a wide range of fields including trade, agriculture, energy, education and training, environmental protection, and sports.

Among the prominent business agreements is the one between Vietnam’s private conglomerate Vingroup and the UK’s Raphael Labs Company for cooperation in developing, investing in, testing, and transferring technology to produce drugs preventing COVID-19 and other respiratory diseases.

Vietnam’s SOVICO Group and the University of Oxford also signed a memorandum of understanding (MoU) worth £155 million (US$212,000) on cooperation and investment in education research and development.

Vietnamese budget carrier Vietjet and Rolls-Royce signed a $400 million agreement on providing engines and engine servicing for the airline.

PM Chinh also witnessed Vietnam's Deputy Minister of Education and Training Nguyen Van Phuc and the representative of the Welsh government exchanging their signed agreements on cooperation between higher education institutions from the two countries.

Representatives of the Vietnamese Ministry of Planning and Investment and Switzerland’s Hume University also agreed to cooperate in building human resource training programs for the ministry and supporting Vietnamese startups.

A British government representative handed over to Vietnam’s Deputy Minister of Health Nguyen Truong Son an amount of £500,000 ($683,700) as support for Vietnam to cope with the COVID-19 pandemic.

Per Monday’s schedule, the Vietnamese premier will receive leaders from many major enterprises and join a seminar on a sustainable and prosperous future through private Investment, before attending the COP26 opening ceremony.

As planned, he will attend the event and conduct a working visit to the UK until Friday, when he leaves for France for an official visit that will last until Sunday.