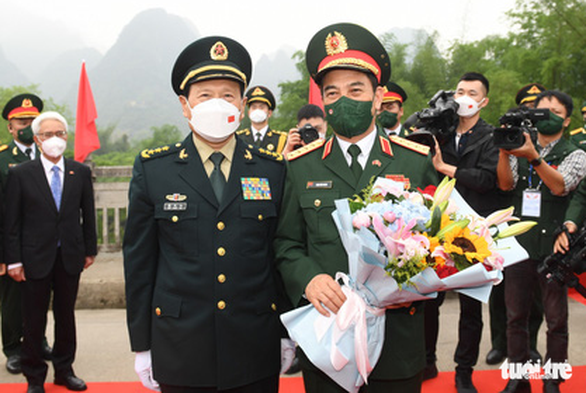 Their talks were part of the seventh Vietnam - China Border Defense Friendship Exchange, co-chaired by the two ministers in Longzhou County of China’s Guangxi Province and Quang Hoa District of Vietnam’s Cao Bang Province on the same day.

In the morning, the Vietnam People’s Army delegation led by Gen. Giang began exchange activities in Longzhou, with the welcome ceremony for the delegation hosted by Minister Wei at Shuikou International Border Gate.

After the ceremony, the two ministers joined a border landmark saluting ceremony, painted a landmark, and planted a friendship tree at the border gate before conducting their talks at the county’s Convention Center.

Gen. Giang told his Chinese counterpart that the Party, state, government, and People’s Army of Vietnam attach great importance to strengthening their traditional friendship and promoting comprehensive strategic cooperation with China, considering this one of the top priorities in Vietnam’s foreign policy.

Giang also thanked the Chinese government for its donations of COVID-19 vaccines and medical supplies to Vietnam during the COVID-19 fight.

The seventh friendship exchange, taking place amid complex COVID-19 developments, demonstrates the important common perception between the two Parties, states, and armies, and the high respect for each other, the Chinese defense minister said.

The event will further strengthen the China - Vietnam friendship, solidarity, political trust and practical cooperation, and contribute to building a peaceful and stable border, for the happiness of the two peoples, Minister Wei added.

The two sides agreed to continue spurring the exchange of delegations at all levels, effectively implementing existing exchange and cooperation mechanisms, and coordinating with and supporting each other at multilateral military and defense forums.

Both ministers stressed the need for the effective coordination and implementation of three legal documents on the land border, strictly protecting the border, preventing crimes and illegal entries and exits, and barring the coronavirus from spreading across the border.

They frankly discussed existing problems between the two countries and agreed to resolve them by peaceful means and international law, for the common interests of the two nations.

The two sides painted landmark 943 and planted a friendship tree at Ta Lung Friendship Cultural Center before visiting and giving gifts to Ta Lung Town Elementary School, among other activities.

This border defense friendship exchange reflected the bilateral friendship and collaboration, the Chinese official told the school, adding that he hoped its teachers and students would contribute to developing the two nations’ cooperative ties, the Vietnam News Agency reported.

Minister Giang emphasized that every bilateral exchange has the same focus on promoting solidarity and friendship for a border of peace and mutual development.