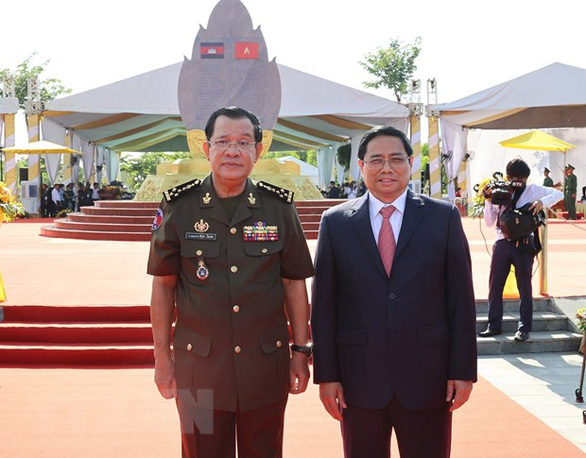 Cambodian Prime Minister Samdech Techo Hun Sen expressed his gratitude to the Vietnamese Party, state, and people for assisting him in the early days to save Cambodia from the genocidal Pol Pot regime.

PM Hun Sen made his remarks when he visited Vietnam’s southern border province of Binh Phuoc on Monday morning, as part of the 45-year anniversary of his journey to overthrow the genocidal Pol Pot regime, the Vietnam News Agency reported.

The Cambodian leader was given a reception by Vietnamese Prime Minister Pham Minh Chinh in Loc Tan Commune in the province’s Loc Ninh District, where Hun Sen set his first footsteps 45 years ago seeking ways to save his country.

During his talks, the Cambodian government chief underscored the Vietnamese people’s pure, sincere, and righteous international spirit and the special solidarity and friendship between the two nations.

He thanked the Party, state, and people of Vietnam, especially people in Loc Ninh who had taken care of and helped him in the early days of his journey building forces to topple the genocidal regime and save his fatherland.

He said his first meal he got from locals when arriving in Loc Ninh 45 years ago saved his life after years of misery and was “equal to tens of thousands of tons of rice in normal conditions.”

“Without the help of Vietnamese people, there would be no Hun Sen and Cambodia as they are today,” the Cambodian PM stated.

Hailing the growth in Vietnam - Cambodia ties in all fields, the Cambodian leader said the two countries’ infrastructure has been connected smoothly in this border area.

The two PMs agreed to build the borderland into a symbol of their cooperation in trade, investment, tourism, and culture.

“The help of the Vietnamese people demonstrates the pure and good friendship between the two countries and the two peoples. I believe that this relationship will be green and sustainable forever,” Hun Sen said.

Also on the morning of June 20, PM Hun Sen hosted a ceremony to welcome PM Chinh and a high-ranking Vietnamese delegation to attend similar commemorative activities conducted by the Cambodian side in Memot District, Tboung Khmum Province.

On June 20, 1977, Hun Sen, then a lieutenant colonel and a regimental commander in Region 21 of eastern Cambodia, along with his comrades crossed the Cambodia - Vietnam border and arrived in Binh Phuoc in seeking help from Vietnam to overthrow the genocidal Pol Pot regime to regain peace for his homeland.

With Vietnam's support, Hun Sen and his associates gradually set up the Kampuchean United Front for National Salvation and, together with Vietnamese volunteer soldiers, defeated the Pol Pot regime on January 7, 1979, liberating millions of Cambodians from genocide.