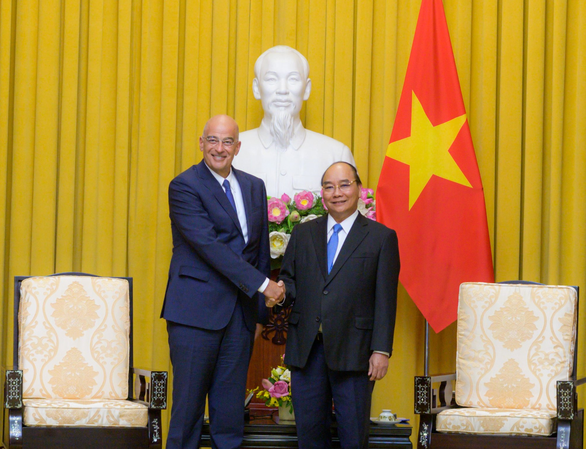 Greek Minister of Foreign Affairs Nikolaos Dendias expressed a desire to place a half-length statue of late President Ho Chi Minh in Greece during a meeting with his Vietnamese counterpart Bui Thanh Son in Hanoi on Monday, according to a statement of the Vietnamese Ministry of Foreign Affairs.

Writing on his Twitter account after the meeting, Minister Dendias explained that late President Ho Chi Minh fought on the Macedonian Front.

Placing a statue of him in Edessa City will help remind the city’s next generations about this historical fact, he said.

Edessa City, located in the north of Greece, is the capital of the Pella region and is bordered by the Republic of North Macedonia.

During the meeting with Vietnamese Minister of Foreign Affair Son, the Greek minister stressed the significance of Vietnam’s role in the Southeast Asian region and the world as a whole.

He also expressed an intention to foster cooperation between Vietnam and Greece.

The Greek diplomat also pledged to call on other EU countries to early ratify the EU-Vietnam Investment Protection Agreement (EVIPA) and welcomed Vietnamese laborers to come to Greece for work.

Dendias added that he had discussed with Vietnam the handover of the body of Kostas Sarantidis, also known as Nguyen Van Lap, who had fought for the independence and freedom of Vietnam during the Vietnamese revolution against French colonizers.

For his part, Minister Son thanked Greece for donating AstraZeneca COVID-19 vaccine to Vietnam and funds to the Vietnam Olympic Committee.

He also spoke highly of Greece’s early ratification of the EVIPA, and suggested Greece urge the EU to soon remove the ‘yellow card’ on Vietnamese fisheries sector.

Minister Dendias visited Vietnam on Sunday and Monday, following a visit by Greek President Katerina Sakellaropoulou in May.

Vietnam and Greece established their diplomatic ties on April 15, 1975.

The two countries’ bilateral trade reached nearly US$447 million in 2021.

The figure was $154.5 million in the first four months of this year, according to the Vietnam News Agency.