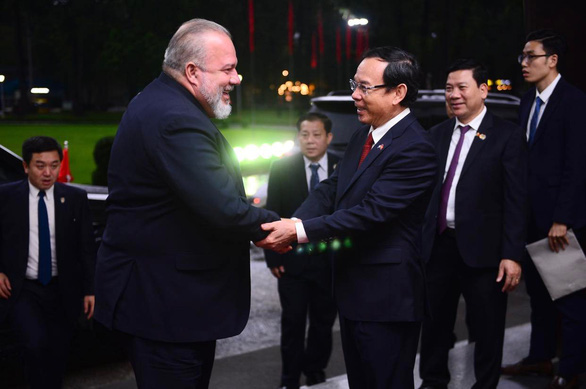 The Cuban PM expressed his wish to the municipal leaders when he visited the city as part of his five-day official visit to Vietnam starting Friday, at the invitation of his Vietnamese counterpart Pham Minh Chinh.

Municipal Party Committee Secretary Nguyen Van Nen and the city’s administration chairman Phan Van Mai had a reception for PM Cruz and his entourage at the Reunification Palace on Saturday before the hosts and guest had talks focusing on boosting cooperation between Cuba and the city.

At his meeting with the Cuban PM, Nen thanked him for choosing Vietnam as the first non-Latin American country he has made an official friendship visit to since he held the post in December 2019.

The city’s Party chief extended his thanks to the Cuban government and people for their support, including vaccine donation, to Vietnam during the fight against COVID-19 that hit the Southeast Asian country in early 2020.

The help of Cuba and the world community has significantly contributed to the efforts of Vietnam, and Ho Chi Minh City in particular, in putting the pandemic under control, Nen added.

Despite the pandemic, the multifaceted relationship between Cuba and Vietnam, and Ho Chi Minh City in particular, has continued thriving, especially in bilateral trade exchanges, Nen told his guest.

As the potential for boosting cooperation between the two sides is aplenty, the city hoped PM Cruz would direct Cuban agencies to strengthen comprehensive cooperative ties with their Vietnamese counterparts, Nen said.

The Cuban premier agreed with Nen, affirming that Cuba wants to increase collaboration with Ho Chi Minh City in hi-tech and pharmaceutical chemical technology projects, among others.

PM Cruz said he was particularly happy to visit the city named after President Ho Chi Minh, where he had visited Cu Chi Tunnels in Cu Chi District and Saigon Hi-Tech Park in Thu Duc City.

At the hi-tech facility, Cruz was briefed on the operation model of the park, a special economic and technical zone built in 2002, and said he was really impressed by its achievements.

Cuba is facing an embargo and thus looking for a solution to its difficulties, the Cuban PM said, adding that he wished his country would have such a successful hi-tech park someday.

He believed that his dream would come true soon if there was close cooperation between Cuba and Vietnam, and the city in particular, in this field.

The Cuban PM also briefed Nen on his talks with Vietnamese PM Pham Minh Chinh in Hanoi, during which the two agreed to strengthen cooperation in various fields.

Accordingly, Cuba will give support to Vietnamese investors in the host country, while Vietnam will assist Cuba in renewable energy development and in the production of rice, coffee, corn, and aquaculture, among other agreements.

PM Cruz’s visit is of great significance as it marks the first time in 49 years that a Cuban prime minister has visited Vietnam after this position was restored following the adoption of the new Cuban Constitution in 2019, according to Vietnamese Ambassador to Cuba Le Thanh Tung.

Vietnam and Cuba have seen their bilateral relations develop fruitfully since the two countries established diplomatic ties on December 2, 1960, after the success of the Cuban Revolution on January 1, 1959.