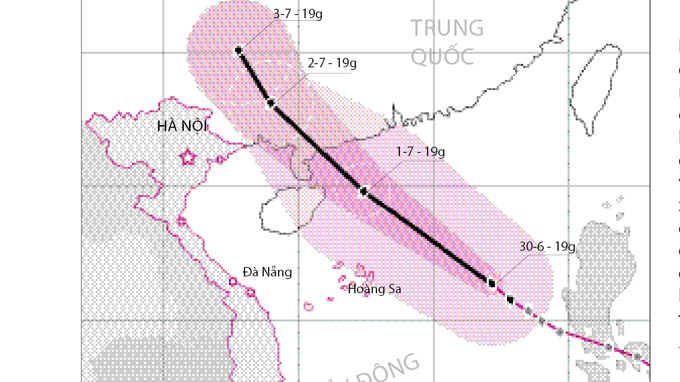 With maximum winds of 88 kph, tropical storm Rumbia is moving through the East Sea at 25 kph towards China’s Hainan Island, the Vietnam National Hydro-Meteorological Forecasting Center has reported.

At 4 am today, the storm was at 17.8 degrees latitude North and 115 degrees longitude East, about 310 km east-northeast of the Hoang Sa (Paracel) Islands, packing winds of 75-88 km and gusts of up to 117 kph. The storm is moving between west-northwest and northwest at 20-25 km and at 4 am tomorrow, July 2, the system will be located at 21.5 degrees latitude North and 110.5 degrees longitude East, northeast of Lei Zhou Island, with the same wind speeds. The storm is then forecast to continue moving at the same speed, and if its course remains unchanged, it will make landfall in southeastern Guang Xi province at about 4 am on June 3, and will weaken into a tropical depression with winds of less than 39 kph. As a result of the storm the northern area of the East Sea, including the region north and east of Hoang Sa, will have rough seas and winds of 45-64 kph, which will increase to 75-87 kph and gusts of up to 117 kph near the storm’s eye. Showers and thunderstorms will also impact the area. At a meeting yesterday the Central Steering Committee for Flood and Storm Prevention and Control and the National Committee for Search and Rescue issued an urgent message to local authorities from northern Quang Ninh to Phu Yen Provinces and concerned agencies, asking them to make plans to cope with the storm. Coastal localities must keep all boats at sea well informed of the storm’s movements so that they do not enter dangerous areas and can escape the storm in time.