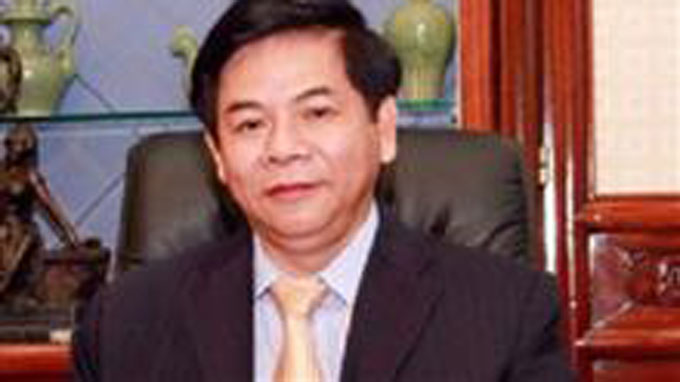 The Ministry of Public Security has charged a standing member of the Management Board of the Asia Commercial Bank, Huynh Quang Tuan, for intentionally acting against State’s economic management regulations and causing serious consequences.

Tuan is the latest defendant in the case that involves seven prominent people, including a former minister of planning and investment Tran Xuan Gia and a well-connected banker and powerful tycoon, Nguyen Duc Kien, in a serious financial case uncovered last year.

The amount of illegal trading in the case totaled hundreds of millions of dollars. Besides taking legal proceedings against Tuan, 56, the Ministry of Public Security also decided to resume an investigation into Pham Trung Cang, 60, a former deputy chairman of the ACB’s Management Board on the same charges as Tuan. According to investigators, Tuan signed on the minutes of the meeting of ACB’s Management Board on June 7, 2013, in which the board entrusted 19 employees of the bank to make deposits at the Vietnam Joint Stock Commercial Bank for Industry and Trade (Vietinbank) to enjoy interest rates of 17.8-27 percent. This act violated Article 106 of the Law on Credit Institutions, investigators said. The total amount of the deposits, VND718 billion (US$33.87 million), was later appropriated by Huynh Thi Huyen Nhu, the former deputy head of the Risk Management Department of Vietinbank, who is being tried for swindling nearly VND4,000 billion  ($188.7 million) from banks, companies and individuals.Cang’s violations Similarly, Cang was found to have signed on the minutes of the meeting of ACB’s Management Board March 22, 2010 in which the board entrusted a number of ACB staffs and four ACB subsidiaries to use ACB deposits to make deposits in USD ($81 million, interest rates: 3-6 percent per year) and VND (130 trillion dong; interest rates: 8.5-27 percent per year) at 29 banks. This act violated the Law on Credit Organizations, Circular 02 of Mar 3, 2011 by the State Bank of Vietnam (SBV) providing regulations on ceiling interest rates, and many other decisions of SBV. Of these amounts, VND719 billion was deposited at Vietinbank and was later appropriated by Nhu. Cang was also found to have allowed an ACB subsidiary, ACB Securities Co Ltd (ACBS) to use VND1,577 billion ($75.39 million) owned by ACB to acquire shares at other securities companies. Cang also authorized Nguyen Duc Kien to direct the share acquisition. This act violated Article 126 of the Law on Credit Institutions and Decision 27 of April 24, 2007 by the Ministry of Finance. At the time when this act was discovered, ACB suffered a loss of VND688 million from this wrongdoing. Cang was also found to have committed similar acts, creating a total illegitimate gain of VND256.8 billion for a number of ACB shareholders while directly causing losses totaling VND1,407 billion ($66.37 million) to ACB.Cang has left Vietnam On December 12, 2013, the Supreme People’s Procuracy issued an indictment to prosecute Kien and his six accomplices on different charges, and referred the case to the Hanoi People’s Court for trial.Kien alone faces four charges, including illegal trading, swindling to appropriate assets, intentionally acting against State’s economic management regulations and causing serious consequences, and tax evasion. On the same day, the Procuracy also suspended an investigation into Cang. On January 3, 2014, the Hanoi People’s Court returned the case file to the prosecutor’s office, requesting clarification of responsibilities of five other persons involved in the case, including Cang and Tuan.  However, after the investigation into Cang was suspended, he left Vietnam via Tan Son Nhat airport in Ho Chi Minh City on December 24, 2013.