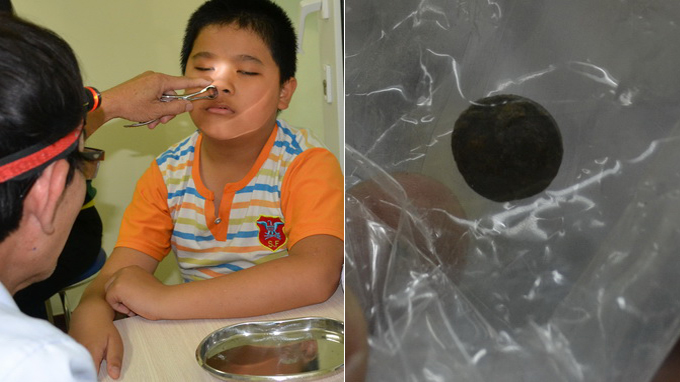 Doctors at a hospital in central Vietnam has removed a small flat-shaped battery from the nose of a 10-year-old boy after it had been stuck in his nasal cavity for five years.

Cuong had been examined and treated at many other hospitals, where doctors diagnosed him with sinusitis – the painful swelling of the sinuses – but failed to treat it.

After a medical examination at Tam Tri Da Nang, located in the central city of Da Nang, doctors found a battery in flat button shape in his nasal cavity.

They later removed the battery by performing an endoscopic operation on the patient.

Cuong’s family members said they had noticed bad smells from his nose four or five years ago.

The boy admitted that he once played with some batteries and one of them might have entered his nostril in some way without his knowledge.

As the battery was in the nose for a long time, its acid leaked out and caused inflammation to nasal partitions and put the nasal cavity at risk of necrosis, or the death of most or all of the cells in an organ or tissue, Phan Thanh Hoang, a doctor at the hospital, explained.

If Cuong’s situation remained been undetected, the acid would erode the nasal bone and adversely affect the respiratory tract through the nose, Dr. Hoang said.