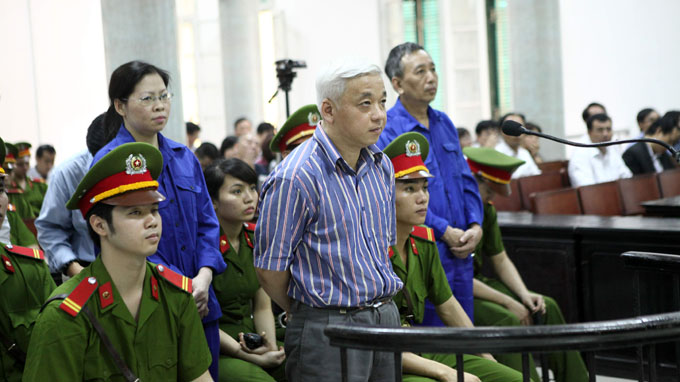 Former Vietnamese banking tycoon Nguyen Duc Kien told a Hanoi court on Wednesday that he has been indicted wrongfully and insisted that all his business activities were legal.

>> 2 more bankers involved in high-profile ACB case >> Tycoon, ex minister indicted in high-profile case >> Arrested banking tycoon gets more charge Kien, who was once one of the richest men in Vietnam, made the above claims at a trial opened yesterday by the Hanoi People’s Court for him and his seven accomplices in a serious financial fraud case that occurred at Asia Commercial Bank (ACB) and some related companies in 2012. The 50-year-old man was a co-founder and deputy chairman of the bank. However, after the morning session, the court decided to postpone the hearing, as Tran Xuan Gia, the former chairman of ACB’s Management Board, one of the defendants in the case, could not attend the court due to serious health problems.  Gia, who is a former Minister of Planning and Investment, had submitted his petition to the court asking for a trial postponement.  After considering and verifying the petition, the court decided to put off the hearing until further notice.  During the morning session, Kien, who was arrested in August 2012, told the court that he has been prosecuted wrongfully. According to the indictment, Kien has been charged with illegal trading, swindling to appropriate assets, intentionally acting against state regulations on economic management and causing serious consequences, and tax evasion. Kien and his accomplice has been found causing a total loss of VND1.7 trillion (US$80.6 million), the indictment said. However, the ex-banker rejected all four charges against him. He said that during the past 20 months of detention, he has sent many petitions to competent agencies, underscoring that he was arrested unjustly because all his business operations were legal. “I have been charged with four offenses, but I have affirmed in my testimonies and petitions that I’m innocent,” Kien told the court. He also complained to the court that police had fettered his legs when escorting him. “This is an improper preventive measure. I proposed that the court request the Detention House T16 stop fettering my legs.”      The former magnate added that he will have his lawyer send a complaint to the Ministry of Public Security about the issue. Regarding the case of Tran Xuan Gia, lawyer Luu Tien Dung, Gia’s defender at court, said that the ex-minister, who took office from 1996 to 2001, is being treated at Huu Nghi Hospital in Hanoi, so he could not attend the trial. “Gia was hospitalized for emergency treatment on April 14. He has suffered from prostate enlargement and is waiting for a surgery,” the lawyer said. Due to his critical condition, doctors request that Gia be kept at the hospital for further treatment, Dung added.Kien’s seven accomplices Besides Kien, Tran Ngoc Thanh, former CEO of ACB Hanoi Investment Joint Stock Company, and Nguyen Thi Hai Yen, ex- chief accountant of this company, have been charged with swindling to appropriate assets. Meanwhile, Le Vu Ky and Trinh Kim Quang, former deputy chairman of ACB’s Management Board; Huynh Quang Tuan, ex-standing member of the Board; Ly Xuan Hai, ex-CEO of ACB; and Tran Xuan Gia have been indicted for intentionally acting against state regulations on economic management and causing serious consequences.