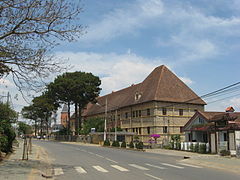 One-third of Da Lat Map Enterprise, a century-old, French-style edifice which holds a monumental, historical, and architectural value, was burned down during a blaze early yesterday, June 9.

At around 1:30 am, a fire broke out at the building, at 14 Yersin, Da Lat City in the Central Highlands province of Lam Dong, which is an agency of the Ministry of Defense.

The inferno, which was extinguished by 9:00 am on Monday, engulfed one-third of the time-honored edifice and caused damage worth roughly VND10 billion (US$472,000).

He added that the flame is likely to be triggered by a short circuit, and the case is being investigated by the ministry for an exact cause.

Apart from the material damage, the blaze has caused an irreparable historical, spiritual loss, as the edifice is one of Da Lat’s four French-influenced architectural icons, along with Da Lat Rail Station, Con Ga (Rooster) Church and Grand Lycée Yersin (which is now the Pedagogical College of Da Lat).

According to local researcher Le Phi, Da Lat Map Enterprise bears southern France’s hallmark architecture, with a sloping wooden roof and walls all made from plaster and stones.

“The mansion is unique in Vietnam and throughout Indochina and is a major tourist attraction in Da Lat, so we were quite shocked to learn that part of it was destroyed during the fire,” Phi noted.

Da Lat Map Enterprise, known as the National Geographical Department prior to 1975, was built in 1939.

After 1975, the mansion’s name was changed into Printing Firm No. 2 under the military-run Cartographic Department and into Da Lat Map Enterprise as it is now.