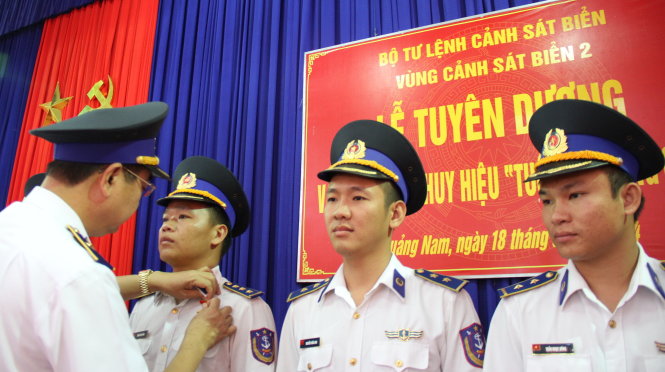 One hundred and sixty three members of the Vietnam Coast Guard in Zone 2 have been honored as “brave youth” for their outstanding performance, greatly contributing to the protection of the fatherland’s sovereignty over its seas and islands.

>> Vietnam Coast Guard receives $570,000 high-speed craft These badges were conferred on the officers at a ceremony held on Friday by the Ho Chi Minh Communist Youth Union at the headquarters of the Vietnam Coat Guard's Zone 2, in Nui Thanh District of the central province of Quang Nam, The badges were presented to the honorees by Major General Nguyen Van Tuong, political commissar of the High Command of the Vietnam Coast Guard. Of these honorees, only 75 were present at the event, while the others were on duty. They will receive their honor later, after completing their missions and returning to the mainland, the ceremony organizer said. Senior Lieutenant Tran Quang Vung, political commissar of vessel CSB-4032, one of the honored officers, said, “While on duty at sea, we face a lot of challenges and difficulties, but all of us always try our best to overcome them to fulfill our tasks.” “It is very honorable for us to receive this Brave Youth badge, which encourages us to have more responsibility as put forth a greater effort in protecting the country’s sovereignty over its seas and islands,” he said.

“Wearing the badge on my chest, I feel as if the image of the fatherland weredeep in my heart,” another officer, Senior Lieutenant Nguyen Manh Truong, political commissar of vessel CSB-2014, said. These badges are among 259 that the Central Executive Committee of the Ho Chi Minh Communist Youth Union has decided to award coast guard members nationwide.