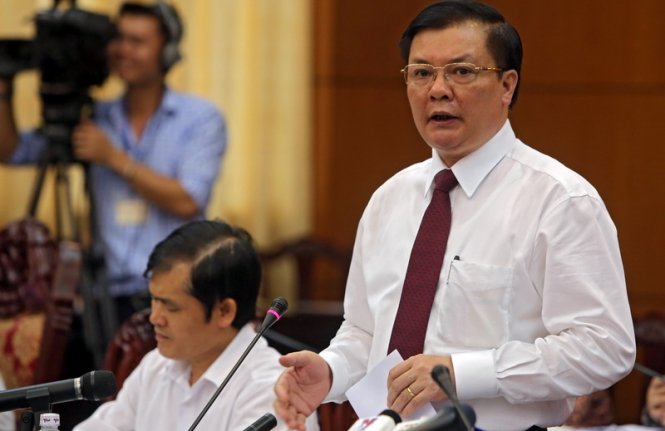 No salary hike for state employees next year: finance minister

There is no resource left from the current tight state budget to set aside for salary hike for state workers next year, said finance minister Dinh Tien Dung at a recent meeting of the Standing Committee of the National Assembly (NA).

An annual salary increase this year for state workers has been delayed for the same reason, if the wage hike for them is postponed once more, the people will question that, and feel very disturbed, said Nguyen Thi Kim Ngan, vice chairperson of the NA in the meeting on Thursday’s morning.

But if we determine to raise the salary, we have to deal with an issue: where will the money come from, Ngan added.

According to a government report read at the meeting, the 2015 budget will remain tight with more money allocated to rising debt repayments. As a result, there is not much resource left for the salary hike.

The 2015 budget will give priority to defense and security expenditures to protect national sovereignty and debt repayments, said finance minister Dinh Tien Dung at the meeting.

Some comments from the Finance - Budget Committee under the NA said that the minimum wage should be increased according to the annual schedule to ensure a quality livelihood for civil servants and state employees.

However, in the context of state budget difficulties, cumbersome bureaucracy and low labor productivity, increasing the basic wage pool will lead to large budget expenditures. So, the wage increase should be considered to be consistent with the ability to balance the budget, Phung Quoc Hien, Chairman of the Finance - Budget Committee asserted.

Without stating that the wage hike should or should not be implemented, National Assembly chairman Nguyen Sinh Hung said there should be more calculation to find if it is possible to allocate a certain amount of resource into the salary increase.

According to NA chairman Hung, the budget structure is now so bad, as up to 72 percent is set aside for regular expenditures, and only 30 percent allocated for both investment-development and debt clearance.

The structure should be returned to normal with 50 percent for regular expenditures, 30 percent for investment-development and 20 percent for debt repayments, the NA chairman requested.

Minister of Finance Dung said the budget balance has been very stressful since 2013.

"In 2013, due to economic difficulties and low economic growth, the need for implementation of social policies and higher wages ate into the money allocated for debt repayments,” he said.

In addition, some VND40 trillion was set aside for debt swap in 2013, he said.

“The situation is forecast to remain tight in 2015 and coming years,” he added.

The Minister of Finance also proposes limiting new policies that help reduce tax collection, while enacting new ones on minimizing spending on travel, seminars and conferences, and overseas business trips.