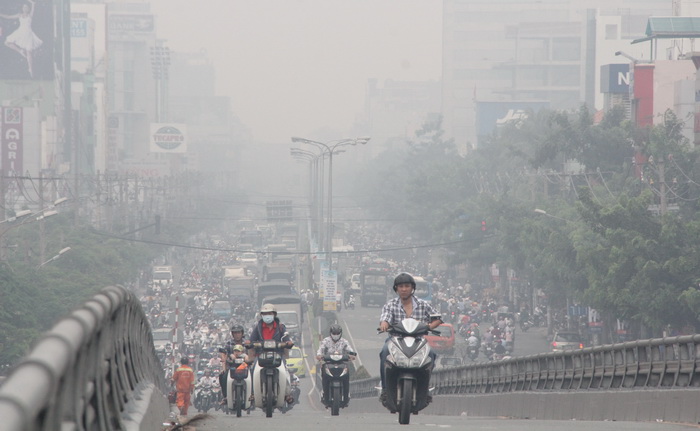 Fog, lasting from early morning to noon on Thursday, covered many areas in Ho Chi Minh City, limiting visions in those areas for at least 4-5 hours.

Quang Dinh, a local resident, told Tuoi Tre that as of 10:30 am, he could not see further than 200 meters when passing the flyovers of Hoang Hoa Tham and Lang Cha Ca in Tan Binh District due to smog.

He could not see anything happening further below on the streets of Cong Hoa, Hoang Van Thu and Le Van Sy when he was riding on the flyovers, he said.

Similarly, M.Cong, told Tuoi Tre that as of 11:00 am, standing on the Saigon Bridge, he still saw fog covering the opposite sides of the bridge in Binh Thanh District and District 2.

Dang Van Dung, head of Southern Regional Hydro Meteorological Center, said the phenomenon is a form of radiation fog resulting from condensation in the air after a rainy night.

Normally, fog will melt quickly when the sun rises. However, the southern region is currently being affected by another natural phenomenon creating a lot of clouds blocking the sunlight. As the sunlight is still weak even at noon, fog will last much longer, he said.

Also according to Dung, as fog is water vapor suspended in the air, when it mixes with pollutants like smoke and dust caused by transport activities, it becomes much thicker and thus, lasts longer.