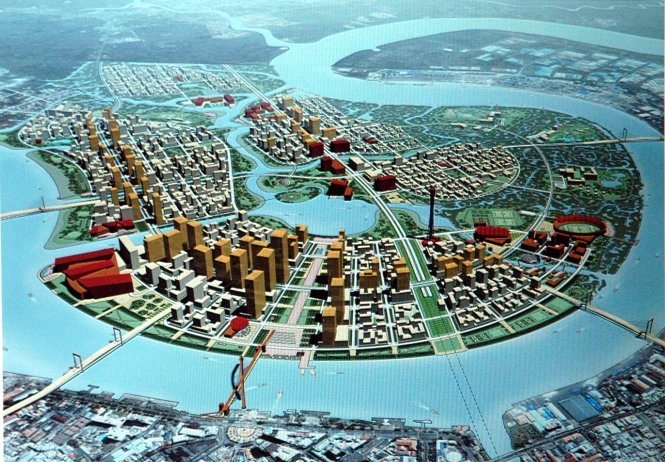 HCMC to kick off $569.4 mn road-bridge project in Thu Thiem

The Ho Chi Minh City People's Committee has signed a Build - Transfer (BT) contract with an investor for building four roads and 12 bridges in the Thu Thiem New Urban Area in District 2 with a total investment of VND12,182 billion (US$569.4 million). The four roads, including an arc avenue, a lakeside road, a Saigon riverside road and a flyover, will have a total length of 11.9 km, according to the contract signed between the authorities and the city-based Dai Quang Minh Real Estate Investment Joint Stock Company on Monday. Of the twelve bridges, two will be viaducts, according to the contract. Of the total investment, VND8,265 billion ($386.3 million) is the cost of construction. The construction of the project started on February 15, 2014 and is expected to complete after 36 months. According to Nguyen Thi Huu Hoa, head of Management Board for Investment and Construction of the Thu Thiem New Urban Area, this project will contribute to perfecting the technical infrastructure of the area. Upon completion, the four roads will play a significant role in the development of the new urban area, linking it with main traffic works in the city like Thu Thiem Bridge, Vo Van Kiet Highway and Saigon River Tunnel, authorities said. In addition, the city authorities and the company also signed another BT contract for building a 9-hectare central square and a 20-hectare riverside park. At the signing ceremony, Vice Chairman of the People's Committee of Ho Chi Minh City Nguyen Huu Tin said after completing the four roads and twelve bridges, the authorities will call on other investors to invest in building other works to improve infrastructure in the area.