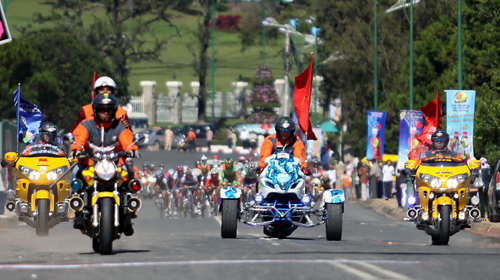 High-capacity bikes should be allowed to use car lanes on expressways: seminar

High-capacity motorcycles with a cylinder capacity of over 175 cubic centimeters (cc) should be allowed to run in lanes for cars or on expressways, participants at a seminar said.

>> OP-ED: Vietnam should tighten grip on granting licenses for drivers of high-capacity bikes Both users of such motorbikes and officials at traffic agencies shared the above view at a workshop held in Ho Chi Minh City on Wednesday centered on “Traffic Safety and High-Capacity Motorbikes.” The event was jointly organized by the National Traffic Safety Committee, Harley-Davidson Vietnam, and the Saigon HOG (Harley Davidson Owners Group) Club. Pham Manh Luan, a member of the club, said exams for driver’s licenses of category A1 (with cylinder volume from 50 cc to less than 175 cc) and A2 (from 175 cc and over) are different, with examinees for an A2 driver’s license facing a more difficult examination than those for an A1 driver’s license. However, when traveling on streets, both types of bikes have to use the same lane with the same speed limits, Luan said, considering this dangerous. Another participant explained that high-capacity bikes cannot travel at 30-40 km like bikes under 175 cc, but if they travel at higher speeds, they will violate regulations on speed limits and face penalties. “Is it advisable that high-capacity bikes be allowed to run in the same lane as cars and even on expressways?” Luan said. There have been many cases in which high-capacity bikes, while driving along with those under 175 cc, have caused accidents after running at higher speeds than allowed or encroaching on lanes for cars, said Major Nguyen Trung Phong, deputy head of the municipal Traffic Police Department. When it comes to high-capacity bikes, two issues to be mentioned are their speed and which lanes are for them, said Nguyen Ngoc Tuong, deputy head of the Ho Chi Minh City Traffic Safety Committee. Such bikes usually run at high speed, so their drivers feel uncomfortable when having to travel in the same lanes as those under 175 cc. Sharing the same view with Tuong, Senior Lieutenant Colonel Tran Huu Toan, deputy head of the Patrol and Control Division under the Ministry of Public Security’s Traffic Police Department, said a number of countries allow high-capacity bikes to use car lanes. Khuat Viet Hung, deputy chairman of the National Traffic Safety Committee, said he recorded this proposal and will raise it as a proposed amendment to the Road Traffic Law at a meeting to review the implementation of this law in the future. According to the Vietnam Register, from 2004 to the end of April 2015, 8,682 motorcycles over 175 cc were imported into the country. Currently, Ho Chi Minh City has about 13,700 high-capacity motorbikes, accounting for 48 percent of the total number of such bikes nationwide, Major Phong said.