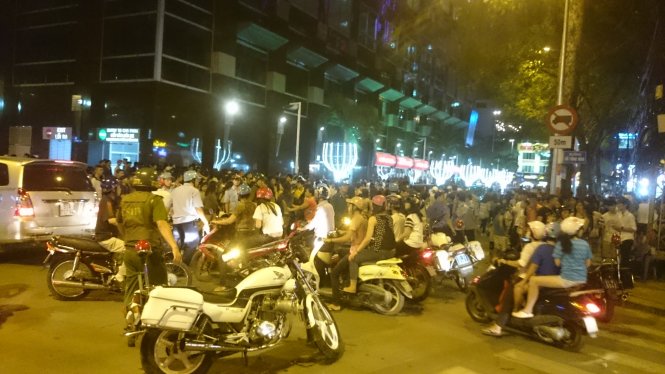 A crowd of curious people on Monday night turned the Nguyen Hue pedestrian street into chaos as they rushed pell-mell to show their support for a ‘scheduled fight’ between two girls.

At around 7:20 pm, the street and the neighboring areas in District 1 were blocked by hundreds of people gathering to wait for the fight between V.H.T.V. and H.V.

The two girls had earlier publicly posted on their Facebook pages videos about their appointment at the venue “to settle [their] conflicts,” drawing the attention of numerous netizens.

Hundreds of policemen were mobilized to the scene to disperse the excited crowd and block the area to prevent more people from flocking to the venue.

By 8:00 pm, the two female fighters had shown up at their rendezvous.

They were immediately asked to come to talk with policemen at the Ben Nghe Ward Police Station on Ho Tung Mau Street.

A half hour later, dozens of people continued to rush in groups to the police office to see how the two “fighters” were doing.

Policemen then had to take a few more agitated fans to their office.

According to a policeman, around 14 people in total were taken to the police station for their aggressive attitude during the incident.

Below is the video capturing the chaotic scene on Nguyen Hue Street on August 3: