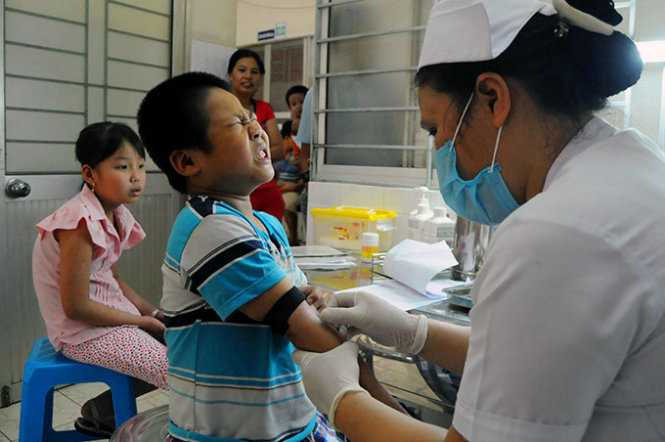 Dengue fever, a mosquito-borne tropical disease caused by the dengue virus, spread throughout Vietnam, affecting 43,000 people and killing 28 in the first nine months of the year, health authorities reported.

The Preventive Health Department under the Ministry of Health released the figures on the sidelines of an online conference on dengue held at the headquarters of Tuoi Tre (Youth) newspaper in Ho Chi Minh City on Monday.

The epidemic has spread to 53 out of the country’s 63 provinces and cities, said Dr. Tran Dac Phu, head of the department.

Compared to the same period of last year, the number of dengue cases increased by 30 percent, Phu said.

Currently, more than 1,000 dengue cases are being detected per week, and the figure may rise in the coming months, as 2015 is the peak of a four-or-five-year cycle of dengue fever, the official warned.

Dengue fever is an infectious disease that is transmitted by the bite of an Aedes mosquito infected with a dengue virus, according to the World Health Organization.

The mosquito becomes infected when it bites a person with the dengue virus in their blood.

It cannot be spread directly from one person to another.

Symptoms include high fever (at 39 degrees Celsius or higher), headache, muscle and joint pains, and a characteristic skin rash that is similar to measles.

People with such symptoms should go to a hospital as soon as possible for examination and treatment, Dr. Phu said.

Dengue patients should not take antipyretics of their own choice or treat themselves at home, as improper therapies can cause fatal complications, the doctor warned.

There is no vaccine against dengue, so the preventive measure is mainly to kill mosquitoes that transmit the virus, the health ministry said.

People should closely cover all containers of water to prevent mosquitoes from entering them and laying eggs, health experts advised.