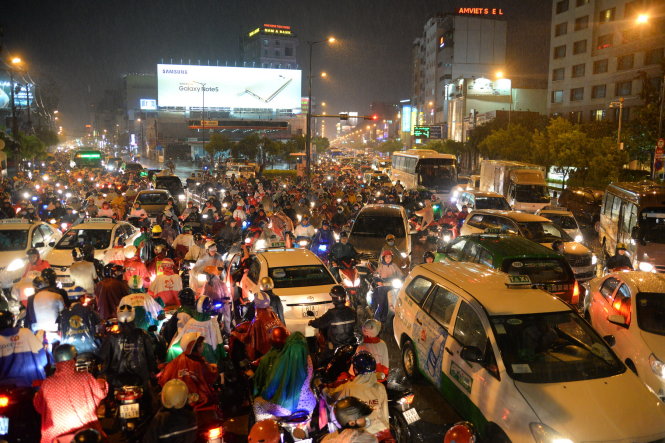 Increasing traffic congestion becomes less in the eye of authorities

Residents in Ho Chi Minh City have blamed that traffic congestion has taken place more frequently but the city’s Traffic Safety Committee said there was only one case of traffic congestion in 2014 and none case has ever occurred in the first seven months this year.

The conclusion from the specialized agency comes from its own definition for traffic jam that is different from the common sense widely used by the masses.

Traffic police and the committee said that traffic jam is only admitted when vehicles stand motionless during 30 consecutive minutes on street.

By that way of conception, authorities cleverly bring optimism to the problem that has been more and more severe recently.

However, the definition has not obtained agreement from all State officials.

Tran Quang Lam, vice director of the Ho Chi Minh City Department of Transport, admitted that the report of the above committee was imprecise because more cases of congestion have not been recorded and included in.

The department judged that the traffic situation in the city has become clearly worsened since September, he said.

Traffic jam has regularly occurred at gateway streets of the city, and on roads leading to ports, railway stations, airport, and key crossroads during peak hours, according to Lam.

The degradation has been even added by flooding after rains and the start of new school year in September.

According to the transport department, Ho Chi Minh City now has a total of 24 ‘hot spots’ of traffic jam, especially during rush hour.

Actually, Ho Chi Minh City has become more and more crowded for vehicles. Every year, the city is added with only two percent of road surface but the amount of vehicles surge up by ten percent.

In the meantime, the amount of passengers using public means of transport has decreased.

It is estimated that the city needs VND25 trillion (US$1.1 billion) a year, excluding the cost of land clearance, for the construction of new roads and other auxiliary facilities and the situation will be improved after such five years, said Lam.

During the waiting time, Lam suggested local authorities to step up checks to prevent illegal parking on streets and pavements and disband unprompted markets on streets.

In addition, the means of public transport should be upgraded to offer better service.