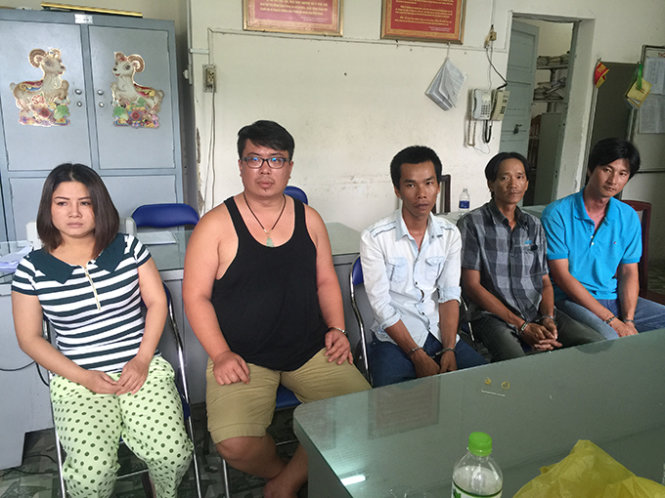 Vietnamese police have detained a 34-year-old Taiwanese man and his four local accomplices who belonged to a swindling ring that allegedly posed as police officers to cheat their victims of money.

Nguyet, Mong, Minh and Xuan all come from the southern province of Bac Lieu.

Police officers said that a member of the ring phoned T.T.N., a 72-year-old woman in District 3, on November 17 to say she was under investigation for “involvement in a large-scale drug trafficking ring.”

The ring member then asked N. to transfer VND400 million (US$17,800) to four designated accounts for a probe and said the money would be returned to her within 24 hours if found not to originate from drug trafficking activities.

After making bank transfers to all four accounts, N. realized that she had been cheated, so she reported the case to police in District 3 for help.

Police then blocked the doubtful accounts, but the ring had already withdrawn VND225 million (more than $10,000) of the total amount.

The withdrawal was made from an ATM machine in Hanoi, according to investigators.

Police continued to track down the swindlers and on Sunday, they raided a house in Ward 8 of Bac Lieu City and arrested Minh.

They later detained Mong in Bac Lieu, as well as Xuan, Liu and his wife Nguyet in Ho Chi Minh City.

According to the case file, in late 2014, after a year in Taiwan, Liu and Nguyet returned to Vietnam, where Liu colluded with a group of swindlers including Vietnamese and Chinese nationals in Hanoi to set up a swindling ring that operated throughout the country, investigators said.

Nguyet and her former Vietnamese husband Nguyen Van Nhut then asked Xuan, Mong and Minh to create 24 ATM cards and then sold them to Nguyet and Nhut.

She also asked her relatives and acquaintances to open more than 40 ATM cards and sold those to her ring.

The ring used the ATM accounts to receive money transferred by their fraud victims.

Nhut, 35, fled when the case was uncovered and is being hunted by police.

Police officers are expanding their investigation into the case to track down other members of the ring, identify its victims, and determine how much money the ring had appropriated.