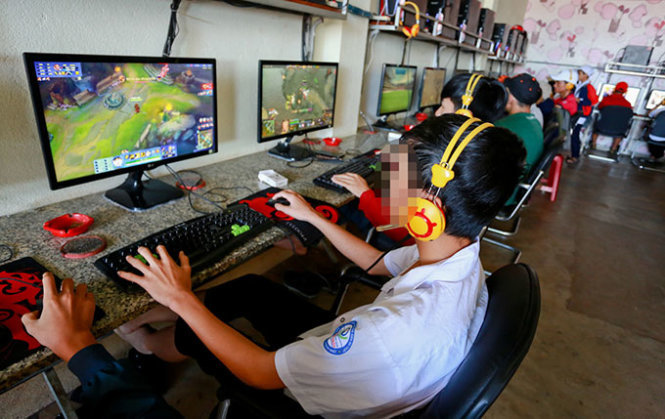 Nearly 100 cybercafés in the southern province of Dong Nai have been dealt a crippling blow by local authorities, at a time when online game addiction amongst the youth has emerged as a social issue in Vietnam.

Seventy-five Internet cafés, where customers mostly play online games, were subject to civil fines collectively worth VND192 million (US$8,571), the provincial Department of Information and Communications said on the weekend.

The department also ruled that the Internet connection for 19 other facilities must be cut, as they are located too close to schools.

Vietnam bans Internet cafés from being situated less than 200m away from schools, in a bid to keep students away from spending their time there instead of in class.

Dong Nai has more than 1,220 cybercafés but the current regulations are not strict enough to completely deter violators, according to officials.

“There are many Internet cafés that are not located near schools, but they violate the rule on opening hours,” said Giang Thi Thu Nga, deputy direct of the information and communications department.

In Ho Chi Minh City and some other locations, cybercafés are only allowed to open until 10:00 pm, but few follow the regulation.

“Our tracking software found that 30 percent to 40 percent of the Internet shops in Dong Nai are still open from 10:00 pm to 8:00 am the next day,” Nga said.

“There are no tougher penalties, so they are not afraid,” the official said. “We should revoke the licenses of those deliberately violating the rules.”

Internet game addiction has become a serious issue in Vietnam, with an increasing number of students skipping classes to play games, while Internet shops defy bans to remain open all day long.

Many online game addicts are also involved in robbery and other illegal activities in order to fund their hobby.

Vietnam now has more than 12 million online gamers, many of whom are addicts, according to a report by U.S. Internet research firm Pearl Research.

A recent survey also found that up to 80 percent of Vietnamese children between the age of ten and 15 enjoy online games.