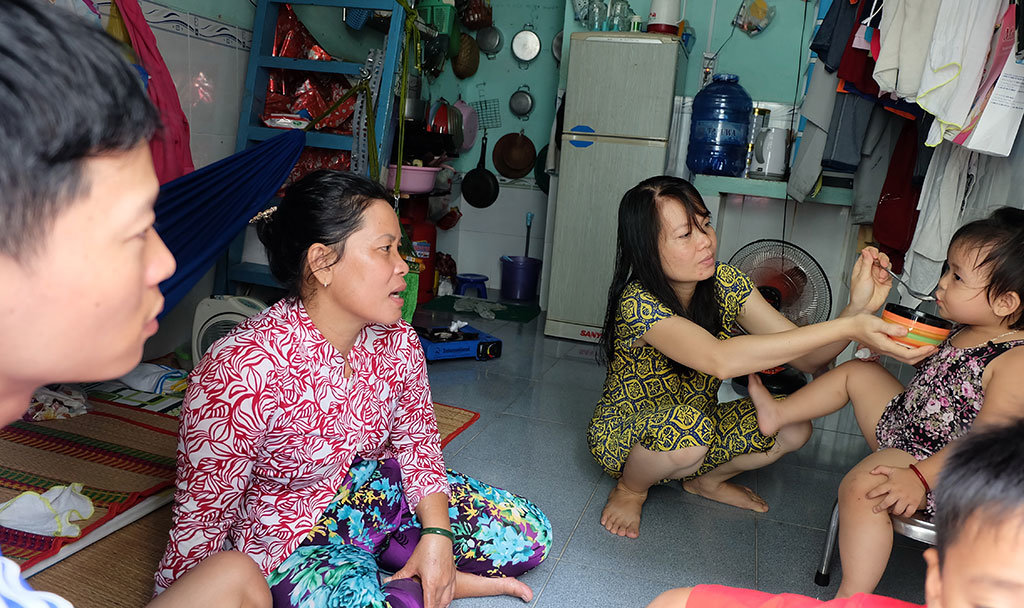 Workers in Vietnam are struggling to survive on meager minimum wages amidst the rising cost of almost everything in the Southeast Asian country.

Most laborers have had to cut spending and work extra shifts to be able to support themselves and their families.

Living with her mother, husband, and their two children in a tenanted house of just 10 square meters near Tan Thuan Export Processing Zone in District 7, Ho Chi Minh City is Huynh Thi Doi, a 33-year-old from the Mekong Delta province of Long An.

According to Doi, most workers in the area often work on the weekend, leaving nearby rented homes locked up and quiet every Sunday afternoon.

Doi has been an employee at a South Korean-owned garment factory for eight years, now earning VND5.5 million (US$242) a month, while her husband works for a similar facility for a lower wage.

“We have to continually work overtime to earn around VND10 million [$440] per month,” the woman said.

Thanks to a five percent increase in the minimum wage promulgated by the state last year, the couple have managed to pocket some VND600,000 ($26) extra per month.

“But we could not be happy for long as the wage raise coincided with the rising cost of everything from rent, food, electricity to babysitting,” Doi elaborated.

In another house in the neighborhood, Danh Huong, 46, and his wife left their hometown in the Mekong Delta province of Kien Giang to work at a factory in Tan Thuan nearly six years ago.

Huong is a porter whose shifts are not fixed, while his wife works from 7:00 am to 10:00 pm seven days a week.

“Although it is exhausting, we both need to work additional hours to earn a decent wage,” the man said.

According to Mai Duc Chinh, vice-president of the Vietnam General Confederation of Labor, the current labor code states that the minimum wage has to be enough to meet the minimum needs of workers.

Following several increases in recent years, the minimum wage is still not enough to improve the lives of local laborers, Chinh said.

Add the current price hikes, and it appears necessary to raise the minimum wage for the interests of workers across the country.

Authorities should establish a specific plan to increase the country’s payroll over an appropriate period of time, the official said.

He also rebuked the recent proposal to extend yearly overtime to 600 hours.

“Humans are not machines. Extra shifts should only be used to solve urgent problems,” Chinh asserted.

The official working hours of Vietnamese workers, 48 hours a week, is still higher than the average global figure of 40 hours per week, he added.