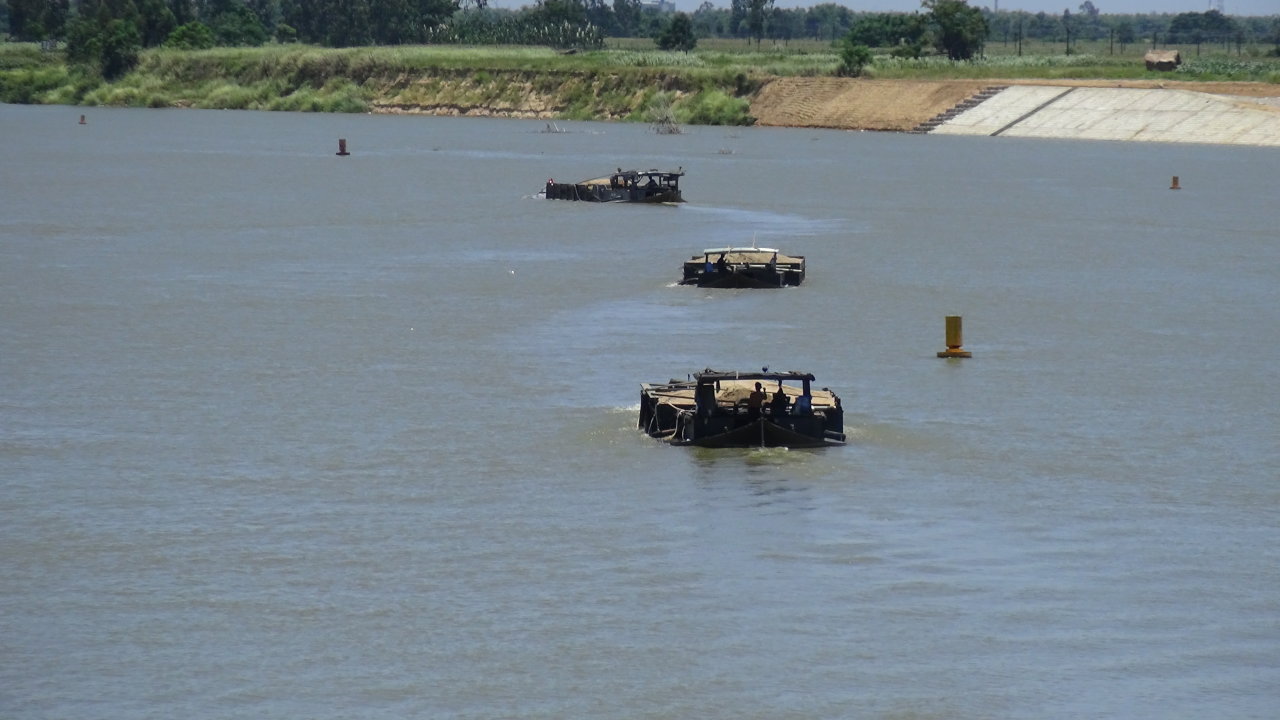 A major river system in the central Vietnamese province of Quang Nam is being devastated by hydropower and sand exploitation operations, putting the welfare of local residents in serious jeopardy.

Vu Gia- Thu Bon, one of central Vietnam’s largest river systems, is being overwhelmed by the 40 hydro-electric dams in its upstream areas.  The situation is equally grave downstream, where aggressive sand mining activities are ravaging the river’s ecosystem.

The sand mines dotting the two rivers are surrounded by dozens of barges working endlessly at full capacity.

One of these mines, located near the Ha Nha Bridge in Dai Dong Commune, Dai Loc District, has caused its fair share of devastation to the area.

According to Ho Binh, a local resident, the mine area was established five years ago.

“A large section of the riverbank collapsed during last year’s flood season. Authorities only shut down the activity after local citizens complained about the issue,” Binh recalled.

After the incident the burden of preventing future accidents fell on local residents, who now regularly fortify the riverbank with sandbags to prevent future collapses in case an upstream hydropower plant releases water and floods the downstream area.

Fifteen kilometers away, more than 20 barges wait for their turn to load the exploited sand and carry their haul to waiting trucks.

Hundreds of vehicles enter and exit the area each day to pick up sand and transport it towards the central city of Da Nang, Le Binh, a local resident, stated.

In Dai Loc District, each kilometer of embankment along the Vu Gia- Thu Bon river system costs VND25 billion ($1.09 million) to maintain.  Meanwhile, the income generated from the 18 sand mines located within the district is a meager VND6 billion ($262,719).

The severity of the situation is so far reaching that it not only affects the nearby environment, but has also spread to Hoi An, a famous tourist city whose famous beach, Cua Dia, is facing serious subsidence issues.

Nguyen The Hung, vice-chairman of the Hoi An People’s Committee, said that some VND140 billion (US$6.1 million) had been spent on mitigating riverbank subsidence in the locality.

During a recent meeting held to discuss the issue, Vu Thanh Ca, a member of the Scientific Research Institute of Sea and Islands, asserted that the subsidence that has been occurring at Cua Dai Beach since 2014 is due to human activity, rather than climate change.

The Vu Gia- Thu Bon river system is the main source of sand for the coastal area around Hoi An, Ca stated, adding that hydro-electric plants and sand exploitation directly impact the area.

According to Bui Van Ba, an official from the Quang Nam Department of Natural Resources and Environment, about 35 legal sand mines currently operate along the Vu Gia- Thu Bon.

The rampant subsidence along the river banks is most likely being caused by illegal exploitation, Ba added.

In an attempt to manage the issue, local authorities have ceased granting permits to new mining units and have put a pause on extending current licenses.

A careful evaluation of the current situation will be conducted to determine the number of sand mines that can operate in Quang Nam without posing a danger to the people or environment, said Dinh Van Thu, chairman the provincial administration.

The environment department will also be tasked with inspecting existing mines and the Department of Police will be responsible for dealing with illicit exploitation, Thu stated.