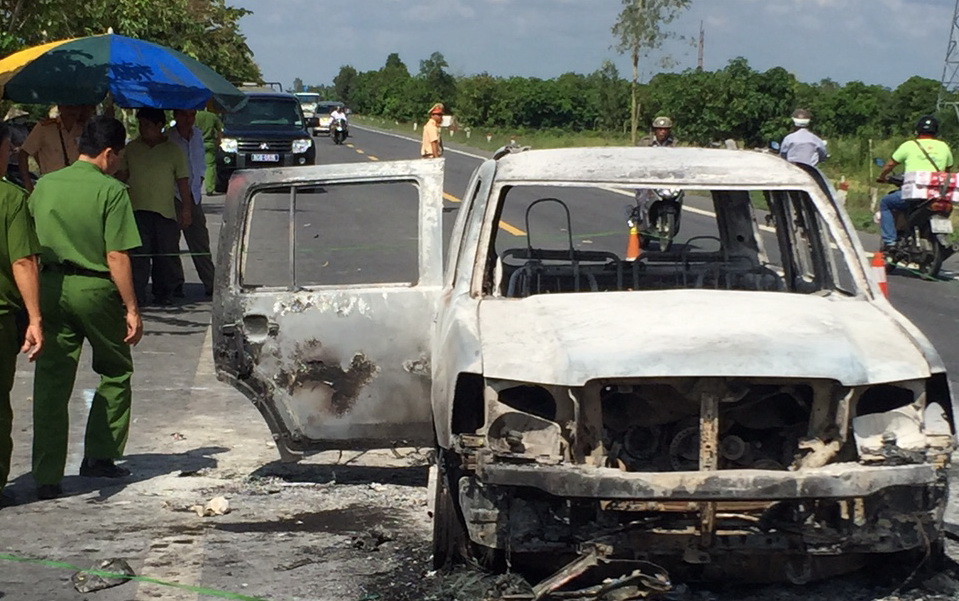 Two company executives and their driver were badly injured after a group of men robbed them and burned their car in Hau Giang Province in Vietnam’s Mekong Delta.

Officers from the provincial Department of Police confirmed on Thursday that they are investigating the attack on Wednesday night of Tran Van Ri, director of Ho Chi Minh City-based Kien Binh Company; Vo Thi Chien, the firm’s deputy director; and Cai Van Trung, the driver.

The three victims were en route from the Mekong Delta city of Can Tho to Vi Thanh City, Hau Giang on National Highway 61C in Nhon Nghia Commune,Chau Thanh A District, Hau Giang when the incident occurred.

At around 11:00 pm, a gang of four to six suspects riding two to three motorbikes blocked the car’s path and began spraying the victims with tear gas.

Chien was stabbed during the attack and her handbag was snatched, along with a considerable amount of money inside.

The attackers then poured gasoline on the car and set it on fire.

Local residents were quick to arrive at the scene and help transport the victims to a local hospital for emergency help. The three were then transferred to Cho Ray Hospital in Ho Chi Minh City.

According to doctors, Chien’s injuries were the most severe, with burns across her body, two stab wounds on her stomach, and another on her thigh.

The car was totaled by the fire.

Lieutenant Colonel Le Van Hue, deputy chief of the police department in Chau Thanh A District, affirmed that officers are investigating the case.

“We are coordinating with the provincial Department of Police to verify whether or not the crime arose from personal conflicts,” Lt. Col. Hue added.