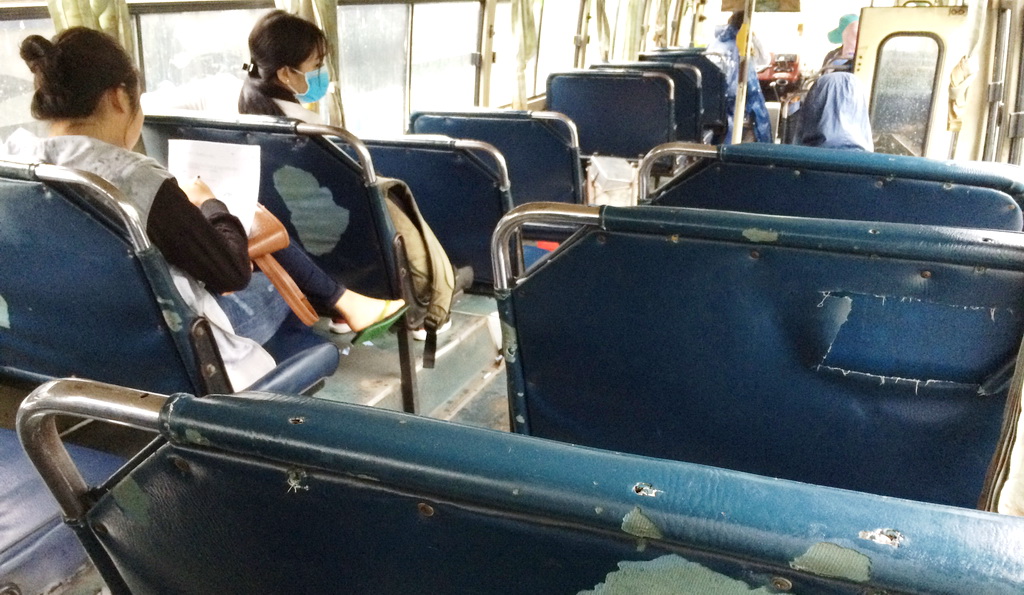 The growing number of old and outdated public buses serving Ho Chi Minh City is hurting efforts from local authorities’ to increase the popularity of the city’s public transport system.

Though many new buses have been added to routes across the southern hub, many vehicles in extremely poor condition are still in operation.

According to the observation of Tuoi Tre (Youth) newspaper reporters, some buses on routes No. 33, 53, and 65, have damaged seats, downgraded air conditioners, and broken lights.

Tran Thu Thuy, a student from the University of Science, who often travels on route No.53, says buses are old and dirty.

Another passenger reported similar problems on route No. 65, asserting that commuting on these dilapidated public vehicles can be extremely uncomfortable.

T.T.S., a 32-year bus driving veteran in Saigon expressed his concerns over the state of the city’s busses.

“Steering an old bus is very stressful.  You never know when a problem will occur. A bus breaking down in the middle of the street is a nightmare for all drivers,” S. elaborated.

Every bus driver wants to sit on a brand new vehicle, one of S.’s colleagues said, before adding that the decision to upgrade or replace a bus relies solely on local transport cooperatives.

According to Tran Dang Tao, deputy director of Quyet Tien Cooperative, which manages bus route No. 65, operating the route has led to serious financial losses.

From the original line-up of 25 buses, only 13 are currently in use, Tao continued.

“We have asked the city’s Management and Operation Center for Public Transport [MOCPT] to replace all buses on route No.65 with smaller vehicles to reduce the expenditure. However, the proposal has not been approved,” he stated.

Meanwhile, a representative of the Quyet Thang Cooperative, which operates five of the city’s bus routes, including No. 53, explained that most of the agency’s buses have been in use since 2003, thus damages are inevitable, despite regular maintenance.

He added that new buses will be added to the line during October.

One of the challenges Quyet Thang Cooperative has met while replacing the old buses is financial capacity, the representative stated, adding that support from local authorities is slow.

The state budget provides local transport businesses special loans worth up to 70 percent of the cost of new buses, Trung continued.