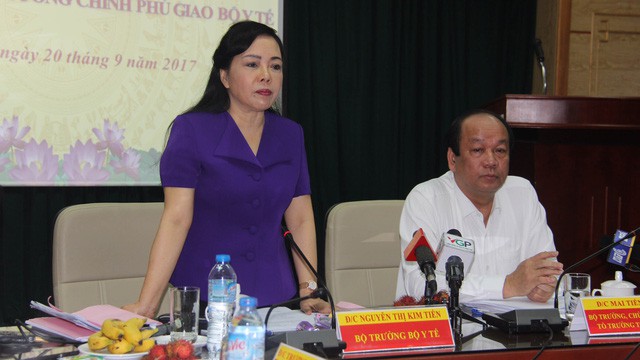 On Friday, Dr. Tran Thi Thanh Hai, working at the medical center of Huong Lam Commune in Huong Khe District, Ha Tinh Province in north-central Vietnam, was on duty when she was assaulted by a 26-year-old male suspect.

The assailant reportedly slashed Hai multiple times on her arms with a knife after she noticed that he was drunk and refused to give him a fluid infusion.

On Monday, Dr. Tran Thanh Son in central Quang Binh Province suffered multiple injuries to his face and eyes after he was attacked by a gang of youths just outside the emergency room at the Vietnam – Cuba Hospital.

The attackers were reportedly unhappy with Son for attending to another man whom they believed had been responsible for a traffic accident involving a friend of theirs, who was also receiving treatment at the hospital.

“I speak on behalf of the Ministry of Health in condemning the violent behavior displayed by those who assaulted Dr. Tran Thi Thanh Hai and Dr. Tran Thanh Son,” Minister Tien said in her statement released on Tuesday.

“The ministry calls on law enforcement in both Ha Tinh and Quang Binh to seek appropriate penalties for the perpetrators.”

The minister noted the increasing number of assaults against doctors recently, which have led to “widespread insecurities amongst medical workers”.

Tien called on the community and local media to “condemn such violent behavior targeted at health professionals”.

She also expressed her condolences for the physical and mental pain endured by the doctors themselves, and requested that their employers offer them the best possible care.

This is the first time the health minister has released a public statement condemning violence against doctors as unhappiness grows among local practitioners over her inaction despite repeated reports of assaults since the beginning of this year.

In August, a footage went viral on social media showing a female doctor in north-central Nghe An Province being slapped by a businessman who thought doctors and nurses at the facility weren’t paying enough attention to his injured employee.

In June, a doctor in Hanoi was assaulted and forced to kneel down and apologize by an angered father for making the wrong diagnosis of his son’s injury.

Another doctor in Hanoi was knocked unconscious and suffered a serious wound to his head in April after a man used a large, thich glass to hit him several times on the head while he was explaining the condition of the man’s son.