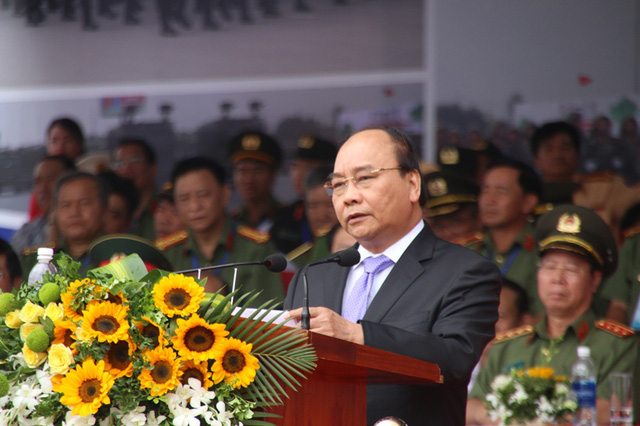 Earlier in the week, thousands of officers from multiple security units participated in a welcome ceremony and performed counter-terrorism exercises organized by the subcommittee of security and health for the 2017 APEC summit.

The event was attended by Prime Minister Phuc, Deputy Premier Pham Binh Minh, and Minister of Public Security To Lam.

The participating officers were made up of various divisions operating under the Ministry of National Defense, the Ministry of Public Security, and Da Nang’s Department of Police and Military Command.

They took part in cavalcades, martial art performances, and anti-terrorism exercises on both land and water.

Speaking at the ceremony, Prime Minister Phuc praised the efforts of police and military forces and the local administration for the successful organization of previous APEC meetings.

He asked security units to be fully aware of the importance of the APEC Economic Leaders’ Week, saying that they must ensure absolute safety at the event.

No mistakes can be made, he stressed.

Police and military units should be proactive and ensure comprehensive measures are undertaken to deal with all sorts of scenarios, the PM added.

“Ensuring safety and security at the APEC summit week is an honor and responsibility.” Prime Minister Phuc stated, before encouraging all officers to maintain their best condition in order to fulfill their duties.

APEC is a regional economic forum established in 1989, comprising 21 member states, including Australia, China, Japan, South Korea, Thailand, the United States, and Vietnam among others.

Running from November 6 to 11, the Economic Leaders’ Week is the culmination of Vietnam’s year of hosting a series of APEC meetings.